5PM: No felony charges for coach accused of knocking down 13-year-old

PAYSON — The Utah County Attorney's Office will not file felony charges against a volunteer football coach accused of knocking a 13-year-old boy down during a game and causing a concussion.

However, Nathan Harris, 38, of Mapleton, isn't completely clear of possible criminal charges. The case will now be referred to the city attorney's office in Payson for possible misdemeanor charges.

On Oct. 6, a 13-year-old boy playing for an opposing football team was running toward the sideline where Harris was standing. A collision occurred between Harris and the boy. The boy suffered a concussion and will not be able to play the remainder of the season.

The Utah County Attorney's Office reviewed the case for potential felony child abuse charges. But because the boy did not suffer "serious" physical injury under the legal definition, the case did not rise to the level of a felony charge, said deputy county attorney Ryan Peters. 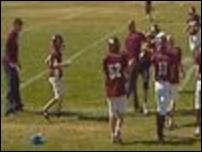 It's sparked big debates: Did the little league coach knock down a 13-year-old football player or not?

The case was sent late last week to the Payson attorney's office for further consideration, he said. Payson City Attorney Mark Sorenson said Monday he had not seen the case yet nor had a chance to review it, and could not offer any comment on it.

Some who were at the game claim Harris intentionally hit the boy while others say it was an accident and there was no malicious intent.

Harris was arrested after the incident and freed after posting $5,000 bail.