SALT LAKE CITY — There has been yet another sighting of the infamous mountain man burglar Troy Knapp, this time with new video. Knapp is accused of breaking into cabins all around Utah and living off of what he finds there, and sometimes even leaving bullet holes or defacing religious icons.

Last month Knapp had apparently moved north to Fish Lake. Now, there video shows him in Sanpete County, closer to the Wasatch Front.

Knapp has moved from Kane to Iron, Garfield, Piute, and Beaver counties. He was last known to be near Fish Lake in Sevier County at the end of August.

Police aren't sure where he is exactly at this time, but last week he was in Fairview Canyon, in Sanpete County, so he has been moving north. He's still been able to avoid being captured, but this is the first video that has been seen of the man.

At first, his eyes light up the infrared surveillance video as he cautiously looks around.

He puts a pair of binoculars to his eyes, apparently looking for an alarm system. Still acting nervous, and with a rifle visible on a sling over his shoulder, Knapp waves his arms, trying to check for a motion sensor, before moving out of the frame and breaking into the cabin.

"Shoelaces, ammunition, guns, food (and) clothing that he thinks he can use are some of the things he has a tendency to take," said Eric Zeeman with the Sanpete County Sheriff's Office 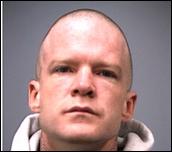 Officials in Iron, Kane and Garfield counties are uniting in their efforts to find a man who they believe has been living in and stealing from cabins in the mountainous regions of their counties for more than three years.

Knapp broke into a cabin not far from the Skyline Drive, near Gooseberry Reservoir in Sanpete County. He's believed to have broken into two cabins in this area within the past couple of weeks.

Last Wednesday, the Sanpete County sheriff brought in a small army of law enforcement to search the area, including the UHP helicopter, but there was no sign of Knapp. But with the elk hunt going on now and the deer hunt soon to follow, Knapp will have an easier time moving around because he won't look out of place carrying that rifle with him.

For elk hunters like Kevin Roseman, who is camped just a mile from the cabin, he's not worried about his supplies disappearing from his camp, even knowing Knapp's reputation.

"As long as he doesn't cross my path, Idon't cross his path,"Roseman said.

"If you see him in the area, don't confront him and if you have valuables, take them home with you. Don't leave them in the cabins," Zeeman said.

With cold weather approaching, there's concern Knapp may be looking for a place to settle in for the winter.

"He knows what he is looking for the stuff he needs to continue to survive and maintain his cover in the mountains," Zeeman said.