SALT LAKE CITY — At the Saturday morning session of the 182nd General Conference, President Thomas S. Monson made an announcement that sent many Mormons into a flurry of activity: Women will now be able to serve missions at age 19, while men can now serve at age 18.

Reaction to the news was generally positive, and many folks were in a hurry to talk to their ecclesiastical leaders about signing up sooner than they had planned.

"My 15-year-old daughter started crying and said with a smile, ‘I can go on a mission in four years,'" said Russ on the ksl.com comment boards. "It was a very emotional moment for our family."

Others expressed satisfaction that there is now one policy on missionary ages worldwide. Previously, there were 48 countries where leaving at age 18 was allowed on a regular basis, as well as other exceptions to the 19-year-old rule for females; whereas in North America and most other places, 19 was the norm. Both the success of these younger missionaries and maintaining a consistent policy was part of the justification for the rule change, according to Elder Russell M. Nelson, of the Church's Quorum of the Twelve Apostles.

It's nice that they are making the policy the same all over the world," said John Gilbert on Facebook. "Over 20 years ago, I served with people who left at these younger ages because they left from countries other than the U.S. It's a big change here in the U.S., but it's been going on for quite some time now everywhere else."

Many women were especially excited about the change, which reduced the minimum age by a full two years for for them, while keeping their missions at 18 months. This could increase the number of female missionaries substantially, while also bringing them home sooner.

Three freshman roommates at BYU spent Monday at the dentist, the doctor, getting shots and interviewing with their bishops.

They are quickly changing their plans. No more school for the rest of the year.

Allie Larson, 18, said from the moment she heard the announcement, her life changed course. "To have it just change all of a sudden, it's just changed everything," she said.

Larson and her roommates are putting their educations on hold at the end of the semester and will likely be sent to different parts of the world.

Freshman Kirsty Faux said, "The initial shock was really powerful, but I knew right away that I was going to do it."

Many are glad the rule change would allow women to leave with less of an interruption to school or other plans.

"I think it will affect women more than men," a commenter named Amber wrote on ksl.com. "If I could have served at 19, I would have been gone in a flash — and I know many girls from my freshman ward who would have served also (several still did). Instead, I got married at 19."

Marriage was also a hot topic among the LDS community. Young members of the LDS faith are encouraged to marry, and the new rules could have real effects on the institution.

Returned missionaries of both genders will be roughly the same age when they get home, assuming they left at the minimum age. Under the previous rules, women may have been leaving on missions just as men returned from theirs, a situation that ought to be less likely now.

Still, some members of the Church were concerned with the possible consequences of the change, concerned that 18 may be too young and worried if the missionaries would be mature enough to survive the difficulties of a missionary's lifestyle. 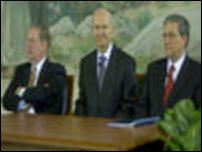 Pres. Thomas S. Monson opened the first session of this October's General Conference for the Church of Jesus Christ of Latter-day Saints with a historic and unprecedented announcement: Women may now serve LDS missions at 19 and men at age 18.

"I think you will find a lot cannot make it or really struggle to survive," Peggy wrote on the ksl.com comment board. "They need time after high school to mature and prepare for their next step in life."

While the change would make possible to leave before college, and thus avoid interrupting a school year or athletic career, some members think that year of college or life experience can help mature a person substantially, making them better potential candidates for a mission. Others were worried that young men and women would feel cultural pressure to leave on a mission at the youngest age possible.

"There is a huge difference between an 18-year-old kid right out of high school and a 19-year-old kid with a year of college or real world work under his belt," a ksl.com user named Paul wrote.

The rule change is not mandatory, however. Church leaders stressed during a press conference Saturday afternoon that the minimum ages are optional. Men can leave at any age between 18 and 25, while there is no maximum age for women. Those who wish to wait are welcome to do so, according to the new rules.

"They are not required to go earlier," ksl.com user Lynette wrote. "I know some that have not been ready and I have known others that are ready to go as soon as they graduate. It is a matter of personal choice between the missionary, their parents and the Lord."