DENVER, Colo. — Opinions have been flying after the presidential candidates first debate last night. The viewpoints vary depending on who you ask, but political experts and columnists around the country seem to lean toward Romney as having the better performance. And "performance" is key in a debate. It's not only what you say, but how you look while saying it.

The debate certainly didn't look like the famous Kennedy-Nixon contrast, and neither Mitt Romney nor President Obama hit it out of the park in terms of outlining what they'll do in the next four years. But, when you're meeting for the first time, in front of millions of viewers, image is everything.

"I thought Romney was on the attack for most of the round," said ninth grader, Jaden Lessnick from the Rowland Hall debate team. "He got out early and made his points clear."

"He had better ton, quicker, more responsive answers to the questions," said Mike Shackelford, the Head Debate instructor for Rowland Hall. "He had a good pace, and just seemed like he was playing to win."

For millions watching the debate, at home, on college campuses or where ever, Mitt Romney made a good impression in the first presidential debate.

"In the debates last night, I think Romney definitely did a good job of presenting himself as a formidable challenger and someone who can be presidential," said Ryan Hoglund, the former debate coach for Rowland Hall.

Historically, challengers have fared well in their first debate, since it's usually the first time they've had the chance to go head-to-head with the incumbent, and they come out swinging. Romney and President Obama jabbed at each other, but neither really landed a hard punch. Body language is as big as substance in these debates, and last night, the president missed an opportunity.

"But for people watching on TV, they saw someone who was looking down, not engaging his audience and sometimes looking frustrated," Hoglund said about President Obama.

President Obama and Mitt Romney have about a week and a half to prepare for the second of their three debates. Advice for round two? 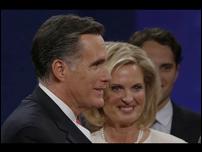 Romney: 'Victory is in sight' after first debate

"To be quite honest, Romney has to keep it up," Shackelford said. "He came into that debate realizing he's a bit behind in the polls, and said 'if I don't turn it around, I'm going to lose this thing.'"

The advice for President Obama was to turn it up a notch, and land some punches early.

"He needs to be more aggressive on Romney in the future, and figure out a better strategy to pin Romney down on something," said debate student, Elliot Kovnick.

A columnist in the New York Times described last night's debate this way: "Over all, it was civil, interesting and not at all exciting."

People expect a few more fireworks in the next upcoming presidential debate on October 16th.