While speaking with the pair, the deputy noticed that their stories didn't add up, became suspicious and eventually learned that Derrick and Braham were fugitives from Utah.

"From what it sounds like they went pretty peacefully," Laursen said.

"In talking to the officer who was involved, it was basically, 'You got me. I'm tired of running,'" the undersheriff said.

Derrick, 31, and Braham, 21, are state inmates who were serving time in the Uintah County Jail under a contract between the Utah Department of Corrections and the county. They were working in the jail's laundry room about 1 a.m. when they pried open the door of a maintenance closet, investigators said.

After gaining access to the closet, the two men managed to crawl outside through a 13-by-23-inch opening that serves as the cold-air intake for the jail's commerical clothes dryers. They then walked across the jail's back parking lot, hopped a fence and crossed through a field, jail surveillance video shows. 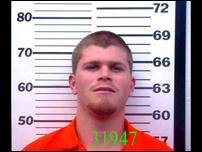 Two inmates who escaped from the Uintah County Jail early Wednesday morning are still on the run. The adoptive mother of one of the men says she believes a difficult childhood contributed to his defiance of the law, and she's asking her son to turn himself in.

About one mile from the jail, the pair stole a GMC Yukon from the driveway of a home, according to investigators. They told authorities in Lancaster County that they drove from Vernal to Rock Springs, Wyo., where they took Interstate 80 east to Cheyenne and then crossed into Nebraska.

The men were able to make the 811-mile journey by stealing multiple cars, Laursen said.

"As soon as they would run out of gas, they would steal another vehicle," he said. "Every vehicle had keys in the ignition and we're still trying to backtrack how many vehicles they did steal."

Derrick and Braham are both charged in 8th District Court with escape from official custody, a second-degree felony, and damaging a jail, a third-degree felony. A no-bail warrant was issued in Utah for the men's arrest.

The pair is also expected to face charges in Wyoming and Nebraska, Laursen said.

It is unknown when the men will be returned to Utah. When they are, they will be housed at the state prison, Laursen said.

As for the vent through which the men escaped, it has been temporarily repaired with a reinforced metal grate while the sheriff's office finds a more permanent fix.

"We are working with our contractor (and) the architect to make sure that this design flaw or oversight on our part is corrected," Laursen said, adding that other security procedures are also being put in place to prevent future escapes.