VERNAL — The Uintah County Commission has admitted that it illegally held a closed-door meeting about federal plans to reduce the amount of acreage available for commercial oil shale leasing.

The violation of the Utah Open Meetings Act, however, was only a "technical" one, according to the county.

State law requires that notice of a public meeting be posted no less than 24 hours before the meeting is to take place, except in emergency situations.

The county's admission was the subject of a special commission meeting Wednesday. It was also included as a footnote on page 7 of an 8-page document Stearmer filed in response to a lawsuit brought against the county commissioners by Sandy Hansen of Vernal.

Hansen, a former attorney, has asked an 8th District judge to rule that the meeting was illegal and invalidate a resolution that was passed by the commissioners as a result of the discussions that were held behind closed doors.

"I read it as an "'Oops, we screwed up and we recognize it.' And rather than lose a lawsuit, they're calling a do-over after I've gone to the expense of filing a lawsuit." - Sandy Hansen

"I read it as an "'Oops, we screwed up and we recognize it,'" Hansen told the Deseret News. "And rather than lose a lawsuit, they're calling a do-over after I've gone to the expense of filing a lawsuit."

The March 27 meeting in Vernal was attended by county commissioners from Colorado, Utah, and Wyoming, as well as members of Gov. Gary Herbert's administration and oil shale industry representatives. It was closed based on the commissioners' belief that the issues discussed would be the subject of imminent litigation, one of six reasons a meeting can be closed under the Utah Open Meetings Act, Stearmer said.

"It would be absurd for a person to go to their attorney and say I need to talk to you about whether or not I have a strong legal argument against another person and then say let's invite the public to that conversation," he said when Hansen's lawsuit was filed in early July.

The March "strategy session," as officials have called it, was organized after the BLM announced its intention to drastically reduce the amount of public lands in Colorado, Utah and Wyoming that would be made available for commercial oil shale development. The tri- state region is home to the Green River formation, which is estimated to have as many as 800 million barrels of recoverable oil from shale. 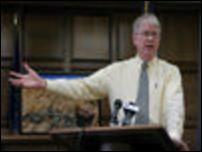 Rural county commissioners and other officials met Tuesday in the Uintah Basin to berate the federal government over its proposal to shrink by 75 percent the amount of public lands available for oil shale and tar sands development.

Commissioners from Carbon, Duchesne and Uintah counties in Utah, and Mesa, Moffatt and Rio Blanco counties in Colorado, as well as a representative from counties in Wyoming attended the meeting, according to a sign-in sheet obtained by Colorado Common Cause through a public records request and included in Hansen's lawsuit.

State law does not prohibit government bodies from including third parties in closed meetings. And because the goal of the meeting was to identify what oil shale companies are capable of, it was crucial to have representatives from the industry on hand to explain the current technologies in use, Stearmer has said.

"It's kind of the example of, if you want to learn about a particular religion, do you go to the people who are just spouting anti stuff about that religion, or would it make sense to go and talk to someone who practices it?" Stearmer said in July.

But Hansen doesn't believe that's what officials were trying to do.

I don't think we hurried into (passing the resolution). We did a lot of refining and asked if it was right for (the county).

"I firmly believe litigation strategy has to be developed confidentially, but that was not their intention to begin with," she said. "The intention was to develop a unified front against the BLM for rolling back the amount of land available for oil shale leasing."

Hansen said that the BLM was still soliciting public comment on a draft programmatic environmental impact statement for commercial oil shale leasing when officials held their meeting. That meant there was no imminent possibility of legal action against the federal agency, she said.

As a result of the meeting, most of the counties involved passed nearly identical resolutions lambasting the BLM proposal to slash the amount of land available for oil shale leasing from about 2 million acres to 462,000 acres, and calling on the agency to abandon the plan.

In Carbon, Duchesne and Uintah counties, those resolutions were presented in open meetings and then voted upon by the commissioners.

Duchesne County Commissioner Ron Winterton said he was unaware of Uintah County's decision to rescind its oil shale resolution until he was contacted Thursday by the Deseret News for comment.

"I don't think we hurried into (passing the resolution)" he said. "We did a lot of refining and asked if it was right for (the county)."

Still, Duchesne County will likely review the resolution in light of what Uintah County has done, Winterton said.

Uintah County commissioners plan to revisit their resolution when they meet Monday. They will also be releasing "all documents and recordings" from the March 27 meeting to Hansen and others who filed public records requests for the information, according to court records.

Hansen, who has terminal cancer, sees Uintah County's about-face on the open meetings issue as a victory. But she also expressed frustration with the commissioners' repeated assertions over the past several months that they had done nothing wrong.

"They could have resolved this three months ago," she said.