SALT LAKE CITY — Emergency officials across the country are battling a disturbing trend: more people behaving erratically after using bath salts. Doctors and police are calling the synthetic drug frightening because of what it does to the user.

Bath salts didn't take off until 2009, when users were just looking for a new, inexpensive high. But the designer drug has had devastating effects on users' brains, as we learned from one particularly gruesome case in Florida. 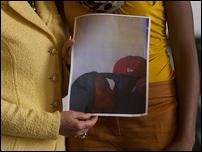 There was no indication the man who chewed off the face of a homeless man had a history of mental illness or was using drugs other than marijuana, the attacker's girlfriend said Wednesday.

The story out of Miami shocked the world: a homeless man attacked a person who began biting off his face.

"Seventy-five to 80 percent of his face was missing, and (the assailant) was actually swallowing pieces of the man's face," said Armando Aguilar, president of the Miami Fraternal Order of Police.

The injured man now needs a facial transplant. The unofficial cause for the depravity: bath salts, a synthetic cocktail that usually contains cocaine and speed.

A Utah man who asked not to be identified told KSL News bath salts are the worst illegal drug he's ever tried.

"I hallucinated, I was shaking," the man said. "I felt out of my body, felt sick to my stomach."

I hallucinated, I was shaking. I felt out of my body, felt sick to my stomach.

He said he's been recovering for the past seven weeks from his last bath salts hit. "I thought it was the lowest on the totem pole of all other drugs," he said.

Bath salts can be injected or ingested, but our addict smoked and snorted them for the quickest euphoria, which then turned into insanity.

"I broke my iPhone with a hammer. I changed the password a million times thinking people were trying to hack into it," the man said.

During our interview, he told us he was disgusted by the "face eater" in Miami, but not totally surprised.

We'll take a look at how police are waging war against bath salts, and how lawmakers are fighting back too, Friday on KSL News at 6:30 p.m.

Michael Desjardins, a psychiatric nurse at Journey Healing Centers, says no one knows for sure what bath salts will do to the brain.

"People become psychotic and they turn into schizophrenics," he said.

Perhaps the sickest thing of all: Desjardins says the makers of bath salts aren't just street thugs; they're professional chemists.

"Really educated people are putting them together in formulation, then selling them to head shops and smoke shops and then convenience stores," Desjardins said.

All therapists can do, Desjardins says, is treat the root causes for bath salts abuse and not the drug itself. "There are a lot of good people doing these drugs, and it's because they're suffering from mental and emotional disorders," he said.

Because the drug is relatively new, medical professionals and police are struggling to find a way to identify bath salts in abusers' systems.