SALT LAKE CITY — Police paid a visit to Charles Johnson, a 50-year-old man with outstanding arrest warrants. Johnson was drunk and despondent over the death of a war buddy. During the visit, one of the officers looked at an album of war photos and then drops it back down on the table.

Reacting instantly to the loud sound, Johnson, in handcuffs, dropped to the floor.

Johnson is actually another police officer, pretending to be a veteran with post traumatic stress disorder who is experiencing a flashback.

The scenario was played out in an empty office space in downtown Salt Lake City as part of the Crisis Intervention Team Academy, a training program that helps prepare police to deal with people with mental health issues. 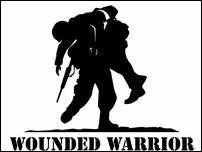 The PTSD police drama is based on a sobering reality of life after war. According to the Department of Veterans Affairs, as many as one out of five soldiers deployed in Iraq and Afghanistan since September 11, is returning with PTSD.

Local VA psychologist Steve Allen guestimates the number of vets stateside with PTSD will keep increasing over the next three to five years. During the week, on the local VA campus, he hosts a discussion about PTSD for the CIT trainees.

In one corner of the conference room, a large man with a baseball hat looks around nervously. His name is Anthony Johnson, a veteran who served in Afghanistan and now has PTSD. Johnson does not want to be at the training.

"My whole body's telling me not to do it," he said.

Do I need help?
Are you or your service member having problems with:

Johnson was deployed to Afghanistan in 2003 as a forward observer and was eventually assigned to Task Force 121, to hunt "high value targets," like Osama bin Laden. After injuring his back in a helicopter crash, he received a medical discharge. A week after he got home, he realized something else was wrong and was diagnosed with PTSD, an anxiety disorder triggered by a traumatic event.

As a result, Johnson said he is hypervigilant. "When I get into my car, I check the reflection in the windows to make sure nobody's behind me."

He even has trouble in large crowds and has had a flashback in a grocery store. "Turn down the frozen food aisle and suddenly I'm in a village in Afghanistan."

During the Charles Johnson scenario, officers do learn how to reorient the veteran experiencing a flashback, but probably the more useful lesson is simply how to communicate with a veteran exhibiting symptoms of PTSD.

"I think it's important to be patient and just listen to them," Anthony Johnson said.

During the CIT session at the VA, Vietnam veteran Rick Miller recounts the time he was pulled over for doing 110 miles per hour down the freeway and the patrolman, approaching Miller, took off his sunglasses.

How do I start?
An intake session is held weekly, every Tuesday, (except holidays) 11 a.m., building 16 (Outpatient Mental Health), group room 1, at the Salt Lake City, VA. No appointment is necessary. Please bring copy of your DD214.

"The guy took off his sunglasses," Miller said. "I saw a human being trying to do his job. For me, to see a cop doing his job, seeing his eyes, really helped center me."

"I think veterans can be put in a corner and come out fighting," Miller said. "And if you don't put ‘em in a corner, if you make ‘em more at ease, things are gonna go a little smoother."

Last January, CIT-trained Cedar City police officer Chris Garrison responded to a man on a fence on an interstate overpass. The man said he was a veteran and he was planning to kill himself, apparently by jumping into traffic. Officer Garrison said he used his CIT skills by talking to the man, giving him time and space, and eventually giving him a ride to Valley View Medical Center. The man was then transported to the VA Medical Center in Salt Lake where he got help.

"I think it takes some compassion on the cop's part," Miller said.