Bryant, a student at Brighton High School, was killed Saturday while riding his ATV at the Little Sahara Sand Dunes, the first fatality there over Easter weekend in the past four years.

"Our hearts go out to the Bryant family," said Brighton High student Jeremy Leavitt. "We're all praying for you, hoping you're doing alright."

In a show of solidarity at Brighton High School, many students wore black in honor of 16-year old Bryant.

"The mention of his name or the thought of Jeremy just brings a smile to my face," said Principal Charisse Hilton.

Bryant was the second fatality in the state this holiday weekend, following the death of Chris Minneci of Park City. On Thursday, Minneci crashed his dirt bike at a popular off-road recreation area in Davis County. 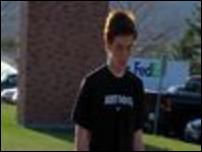 Teenagers at Brighton High School are wearing black in honor of one of their classmates killed in an ATV accident over the weekend.

Authorities said that with the sport's popularity, deaths and injuries are bound to happen. There were two ATV-related crashes in Tooele County, including one involving a 19-year old woman who was critically injured after rolling her machine. A pregnant woman was hurt in a minor crash at Sand Mountain. Several others were treated for injuries too.

At Little Sahara this weekend, ten people were taken to the hospital. About a dozen were treated at a medical trailer.

There were no deaths last year, but the number of injuries was about the same. The Juab County Sheriff's Office said on average about six people die each year at the sand dunes. When someone is hurt or killed, it's just another reminder how dangerous the sport can be, even for the most experienced rider, sheriff's officials said.

"It's a whole new ballgame when they go out there and ride, and you really need to know how to ride a four-wheeler or motorcycle or any ATV out on a sand dune," Pulver said.

Bryant was an experienced rider and was wearing a helmet. Minneci, who died on Thursday, was also wearing safety gear. Authorities say that isn't always enough to protect you.