3 officers remain on leave after shootout with teen

Police arrived shortly after 8:30 a.m. Sunday after receiving an emergency call from the boy's mother saying that the teen had left his house, 3845 S. Westgate Circle, in a black ski mask and bulletproof vest alone. She also said he was carrying a .45-caliber handgun he had obtained by breaking into a locked gun locker in his house.

Two officers driving separate vehicles arrived in the area at the same time. Before they even got out of their vehicles, Sean Morrison aggressively walked toward the officers and opened fire, said Unified Police Lt. Justin Hoyal.

Multiple shots were fired. None of them hit the officers or their vehicles. Morrison immediately ran off after firing his weapon.

They're a bit shaken up over this. It's really sad that our officers are put in a position they have to shoot a 15-year-old. We had no choice in this situation.

While running through backyards, the boy had an "encounter" with a neighbor in which he brandished his weapon, Hoyal said. Officers found the boy a short time later after he barricaded himself behind a neighbor's vehicle. Morrison again shot at officers, who then returned fire, striking and killing the boy.

"They're a bit shaken up over this," Hoyal said of the three veteran officers who fired at the teen. "It's really sad that our officers are put in a position they have to shoot a 15-year-old. We had no choice in this situation."

Counseling services are available to any officer who needs it, Hoyal said.

What caused the boy to snap was still unknown Monday. Hoyal said police went through his house and found additional rifles, handguns, ammunition and body armor, but those items remained locked up. There was no other evidence inside the house that pointed to a possible motive, he said.

Morrison has had repeated contact with police and has a history of mental difficulty, according to investigators. Officers had been to the teen's house before, both for him and his father. It was unknown if those mental issues played a role in the shooting. 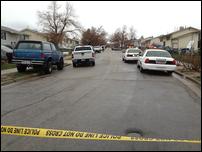 Police shot and killed a 15-year-old who fired two shots at officers Sunday morning, leaving more questions than answers from the troubling confrontation with the teenager.

He attended Copper Hills Elementary School at one point, but was removed by a parent or guardian prior to completing the third grade in 2006, according to a Granite School District spokesman. No reason was given for Morrison being pulled out of school. That was the last time he was enrolled in the district.

It was not immediately known Monday if Morrison had enrolled at another school.

His father, Barry Morrison, remained in the Salt Lake County Jail Monday. In February, he was charged in 3rd District Court with 12 felonies, including aggravated sexual abuse of a child, rape of a child and forcible sodomy.

There were four people who still lived in the Morrison home Monday, the mother and three children.