GOP: What if Romney loses Michigan?

SALT LAKE CITY — Some Republicans are suggesting it's not too late to find another presidential candidate if Mitt Romney loses in the Michigan primary next week. Others admit that scenario isn't likely.

Romney was raised in Michigan and his father served as the state's governor. Four years ago Romney soundly defeated other GOP candidates there.

Now ABC News quotes one prominent GOP senator who requested anonymity as saying, "If Romney cannot win Michigan, we need a new candidate." He felt, "we'd get killed" if Romney lost Michigan and ended up as the GOP nominee facing President Barack Obama in November.

Speaking to Fox News, Newt Gingrich acknowledged losing in a supposed "home" state would be a problem for any of the Republican hopefuls. "If any of the three loses our home state, if Santorum loses Pennsylvania, Romney loses Michigan, or I lose Georgia, you have, I think, very badly weakened candidacies," he said. 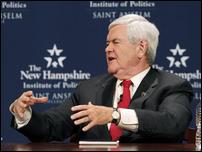 However, according to a Politico blog, "Most concede that it's late in the game and such a scenario is highly unlikely."

"Despite the grumbling, party operatives admit that the chances of a late entrant at this stage are akin to a walk down Imagination Lane," it continued.

If a new candidate were able to get on the ballot for every remaining primary for which the filing deadline hasn't passed, it would include only 11 states worth 482 convention delegates. That's not even half the number needed to clinch the nomination.

Some say the solution may be a contested convention in which the GOP is not settled on a nominee when they convene in Tampa in August. But even that's not a guarantee to generate a strong, different candidate. And experts say if Romney comes in with a strong plurality of delegates it would still be difficult to unseat him.