MOAB — This Saturday will mark 10 years since the Olympic flame arrived in Utah.

Utah's leg of the torch run began at one of the state's most recognizable landmarks — Delicate Arch in Arches National Park. Frank Arrowchis of the Northern Ute Tribe was the first Utahn to hold the torch, welcoming the Olympic Games to Utah, just as the sun came up.

"Then we started the prayer and that's when, for me, things started changing, because I never had that feeling before," Arrowchis said. "I've said prayers and offered prayers and have asked for things in prayers, but it was a humble feeling."

The warm feeling I had inside me was different. It was just a different feeling.

Even though it was 10 degrees that morning, his shivering suddenly disappeared.

"The warm feeling I had inside me was different. It was just a different feeling," he recalled.

The first person he handed the torch to was his granddaughter, who seemed to stop shivering, too.

"I asked my granddaughter, I said, ‘How are you doing?' She said, ‘You know, Grandpa, I'm not even cold anymore,'" Arrowchis said.

It was a special moment for his family and for Arches National Park.

Jim Webster, chief ranger at the park at the time of the Olympics, said, "It helped put Delicate (Arch) and Arches National Park on the international stage."

Coming up on KSL TV 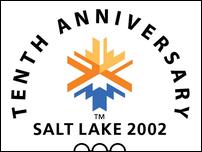 Tonight KSL's Alex Cabrero shows us the different cities, neighborhoods and communities that the Olympic Torch traveled through, including one town that fought to get that torch and won.

Webster is retired now and still can't believe all the months of planning it took before the torch arrived. Right in the middle of the planning came Sept. 11.

"After that happened, this wonderful event also became a security event," he said.

Then local, county, state and even federal law enforcement agencies were involved when the torch came to Arches. A lot of it was in the background because they didn't want to distract from the ceremony. But Webster knew what was happening.

"There was a lot of communication," he said. "There was awareness that this was a special and very public event, and we just needed to be ready. So we planned it and we were ready for something, for the unexpected."

The torch ceremony at Arches was a huge success and brought unity, according to Webster.

"The Olympics really did, in this country, it really brought everybody together after such a tragic time just a few months before," he said.

It's a feeling Arrowchis says he's never felt before or since.

"I don't think that I'll ever experience that again," he said. "Maybe I will; I don't know. But it was a different feeling."