SALT LAKE CITY — Whether it's Mitt Romney and Jon Huntsman in the race for the White House, or "The Book of Mormon" on Broadway and "I Am A Mormon," the media-dubbed "Mormon Moment" has brought a major survey from the Pew Forum: more than 1,000 members of The Church of Jesus Christ of Latter-day Saints answering questions about their faith.

How much do Americans know about Mormonism? 62 percent said not too much or nothing.

"Despite Mormonism's public relations effort, perhaps the survey demonstrates that there is still a lot of misinformation, or lack of information, among the general public about Mormons," said Paul Reeve, an assistant professor of history at the University of Utah.

Do others see Mormonism as mainstream? 68 percent said no. 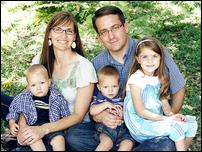 The Pew survey on "Mormons in America" also focused on Mormons' beliefs about marriage and family. Among other findings, it showed that Mormons are more likely to be married than the general population, and 81 percent of Mormons say being a good parent is "one of the most important things in life."

"There's always been this dynamic tension between the mainstream and Mormonism, and I think Mormons even see that as essential to their identity," Reeve said.

Is there rising acceptance of Mormonism in America? 63 percent said yes.

Pastor Greg Johnson, of the Utah religious organization Standing Together, says evangelicals have changed their ideas about this. The issue used to be "what are we going to do to stop a Mormon from being a candidate?" Johnson said. "That's not the issue right now. The issue is now: ‘It's likely (a Mormon will be a candidate), so we're Ok with that. But what is that going to mean?'"

When it comes to how Mormons are portrayed on television and in films, 54 percent of Latter-day Saints say it hurts their faith's image. But they are less negative when it comes to news coverage: 52 percent say reporters are fair; 38 percent say they are unfair.

Allison Pond, current associate editor at the Deseret News, used to work for Pew Research and was an advisor on the survey. "We've been getting all this other data about what do other people think of Mormons? Now we can say, what do Mormons think about that? And what are their reactions to the ‘Mormon Moment'?" she said.

KSL News asked The Church of Jesus Christ of Latter-day Saints for a comment on this survey, and church spokesman Cody Craynor sent the following statement:

"As the Church and its members are increasingly the focus of media attention, we're eager to participate in conversations that help the public get to know us better.

"Even though the recent Pew study did not survey any of the Church's 8 million members who live outside the U.S., it highlights some important aspects regarding who we are and what we believe. For example, the study found that Church members subscribe to traditional Christian beliefs, have high moral standards, are overwhelmingly satisfied with their lives and communities, are active in serving others and have a profound dedication to family.

"These results reflect the Church's message that a deep commitment to the teachings of Jesus Christ brings lasting happiness."