Distant space travel: What does it take?

SALT LAKE CITY -- New astronauts now being recruited by NASA could be among those going to Mars sometime in the mid-2030s. While that trip will be challenging to say the least, it's just the tip of the iceberg for humans envisioning longer journeys.

After years in deep hibernation, long distance space travelers emerge in reasonably good health. It's the classic view of science fiction tales like "Avatar." But in the real world, suspending life in deep sleep would only aggravate problems humans have already experienced in space even when not sleeping.

"You're spinal cord expands. You gain a couple of inches in height because of the loss of gravity. Your muscle mass decreases. Your bones de-calcify," explained Seth Jarvis, director if the Clark Planetarium.

But what if we could modify the human experience in space? We're not just talking about a two week trip to the moon -- a trip we've already taken. Now we're going way beyond that: to Mars, a two-year journey, and even beyond that! 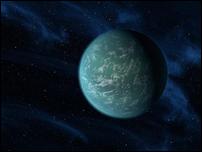 Planet in sweet spot of Goldilocks zone for life

A newly discovered planet is eerily similar to Earth and is sitting outside our solar system in what seems to be the ideal place for life, except for one hitch. It's a bit too big.

"'What if we could make spacecraft travel 10,000 times faster?' Jarvis asked. "That's one-tenth the speed of light. Now we're talking about a 40-year trip to the nearest star system, and for one of those earth-like planets way out there?"

"Let's say you found another earth, and it's only 400 light years away," he added. "Traveling at 10 percent the speed of light, which is screaming fast, that means you are looking at a journey of 4,000 years."

One-way trips, generations that live and die while traveling, and hibernation — perhaps humans could sleep in gravity, spinning the spaceship's sleeping quarters in hibernation while using the non-spinning section for the waking hours.

What can we learn about metabolism and hibernation from animals that already hibernate? BYU researchers have been studying bear hibernation for years. Concealed cameras show that though sleeping a lot, bears wake at intervals and move about.

"The females will come out of the den and gather nest material and bring it back in, and just be pretty active all the way around," said BYU researcher Julie Millen.

During sleep, nature also provides a metabolic safety net for the bear's bones.

Learning from the bears and in collaboration with BYU, researchers at Michigan Technological University are now testing a new lab-reproduced protein that could replace bone loss in humans with osteoporosis. Could this chemistry help long term space travelers as well?

"The bone strength and the mechanical properties of the bone are the same if not slightly better upon den exit than the bones are when the bear goes into the den," BYU researcher Janene Auger said.

Learning from the bears and in collaboration with BYU, researchers at Michigan Technological University are now testing a new lab-reproduced protein that could replace bone loss in humans with osteoporosis. Could this chemistry help long term space travelers as well?

In deep hibernation, some animals may even slow down the aging process. Another animal, the Arctic ground squirrel, not only maintains bone density but muscle as well.

"And then in a remarkable new piece of work, these animals among all mammals — they found they also increase testosterone and other androgen productions and they build muscle mass," said Dr. Hal Black, also a researcher at BYU.

What if humans could deep sleep? What if we could meet all the major physical and psychological obstacles for distant space? What if we colonize moons and asteroids in preparation for these longer journeys? What if we send out a whole new breed of explorers?

"You may just set them out there and you're like a dandelion seed blowing in the wind and that dandelion doesn't really care where the seed goes -- it's simply enough that it left," Jarvis said.

As Jarvis suggests, you're sending seeds of humanity into space so that no single catastrophe on earth ends the gene pool.