LIBERTY STATE PARK, N.J. — Former Utah Gov. Jon Huntsman Jr. announced his bid for the presidency Tuesday with the Statue of Liberty in the background, pledging to conduct a civil campaign focused on restoring Americans' faith in their country.

"I don't think you need to run down someone's reputation to run for the office president," he said, acknowledging his respect for the other Republicans in the race as well as the Democrat he served under as U.S. ambassador to China, President Barack Obama.

We're choosing whether we are to be yesterday's story or tomorrow's. Everything is at stake. This is the hour when we choose our future.

"He and I have a difference of opinion on how to help a country we both love," Huntsman said from a podium flanked by a pair of U.S. flags. "But the question each of us wants the voters to answer is who will be the better president; not who's the better American."

That line in particular struck political observers as setting Huntsman apart from a crowded GOP field that includes another candidate seen by Utahns as a "favorite son" because of his ties to the state, Mitt Romney.

"Touché. That was a highlight," said Utah advertising executive Tom Love, a longtime friend and support of Huntsman's. "It reminds me a little bit of when Obama started out. It inspired me."

Other candidates, Love said, are trying to tear down the Obama administration but Huntsman is attempting to appeal "to the broad part of the middle by being a gentleman. … This is Jon standing alone."

I don't think you need to run down someone's reputation to run for president.

Whether that's going to be an effective strategy in taking on an incumbent president remains to be seen.

David Woodard, a political science professor at South Carolina's Clemson University, said civility may not be what GOP voters are looking for in 2012.

"I think he's right to call for that. At the same time, to win the Republican nomination, I think what he's going to have to do is really attack Obama," Woodard said, questioning how Huntsman could "be civil and also critical of his former boss."

"It's unclear the GOP is in a quirky mood," Scala said, especially when other Republicans are taking on Obama directly, unlike Huntsman. "If he's going to be more gentle about it, I'm not sure Republicans are in a gentle mood either."

Huntsman's generally upbeat announcement speech did contain a warning that for the first time in the nation's history, the next generation is being passed "a country that is less powerful, less compassionate, less competitive and less confident than the one we got. 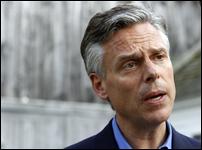 Who is Huntsman? Dropout, ex-governor, diplomat

"This, ladies and gentlemen, is totally unacceptable and it is totally un-American," he said, adding that it's time to make the "hard decisions that are necessary to avert disaster."

Huntsman, who returned earlier this year from serving in Beijing as Obama's U.S. ambassador to China, also highlighted the foreign experience that's seen as his political strength.

He made note of "our most famous symbol of the promise of America" behind him, and that Lady Liberty had been used as a backdrop by another GOP presidential candidate, Ronald Reagan, in 1980.

Huntsman reminded voters of his accomplishments as governor of Utah in balancing the budget, cutting and flattening tax rates and maintaining the state's AAA bond rating.

"When the economic crisis hit, we were prepared," Huntsman said. "We proved government doesn't have to choose between fiscal responsibility and economic growth." For most American families, he said, "there is nothing more important than a job."

Huntsman did not mention the Mormon faith he shares with Romney, but referred to himself as a husband, a father to seven children, and the son of "great parents." His father, Jon Huntsman, Sr., an Area Seventy in The Church of Jesus Christ of Latter-day Saints, celebrated his 74th birthday Tuesday.

A majority of Utahns believe the perception of the Mormon faith has gotten better since the last presidential race, but most still see LDS Church membership as a negative for Jon Huntsman Jr. and Mitt Romney.

A new Deseret News/KSL-TV poll found that Huntsman trails Romney in Utah, with 50 percent of those polled saying they'd vote for Romney in a GOP state primary and 22 percent for Huntsman.

Romney does even better among respondents who said they were likely to vote in a GOP primary, with 60 percent compared to just 16 percent for Huntsman.

The poll, conducted by Dan Jones & Associates June 13-16 of 406 registered voters statewide, has a margin of error of plus or minus 5 percent.

Either Romney or Huntsman would handily defeat Obama in Republican-dominated Utah, according to the poll. The last Democratic presidential candidate to win in Utah was Lyndon Johnson in 1964.

Respondents said they would vote for Romney in the November 2012 general election over the Democratic president, 71 percent to 22 percent. If Huntsman is the GOP nominee, they'd choose him over Obama, 72 percent to 19 percent.

Huntsman spokesman Tim Miller declined to comment on the poll. "At this point there are so many of these polls, we have a policy of not commenting on them," he said Monday from the campaign's headquarters in Orlando, Fla.

Huntsman rescheduled a visit to Utah originally planned for Friday, the same day Romney is hosting fundraisers at a private home in Orem and at the Grand America hotel.

Now Huntsman is expected to be in Utah on Tuesday, where in addition to holding a fundraiser at the Alta Club, he will hold an event open to the public, possibly a rally at the state Capitol.