NBC: Romney Throws His Hat In

Romney made the announcement at Bittersweet Farm, owned by a former speaker of the New Hampshire Legislature, Doug Scamman. New Hampshire was also the backdrop for Romney's online announcement in April that he was forming a presidential exploratory committee.

New Hampshire, which is first in the national primary next year, is being described as a must-win state for Romney, who finished second there in his 2008 White House bid to the party's eventual nominee, Arizona Sen. John McCain. 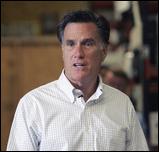 Mitt Romney knows a thing or two about second chances.

Romney, a Boston-based businessman who amassed a personal fortune turning around troubled companies, emphasized the need to fix the nation's economy in a speech delivered near a barn decorated with his campaign slogan, "Believe in America."

President Barack Obama, "has failed America," Romney said, describing a family in Las Vegas who have seen homes in their suburban neighborhood abandoned, "crushed by this Obama economy."

He said government has grown too much, calling for spending to be capped and the federal budget to be balanced, warning, "We are only inches away from ceasing to be a free market economy."

Romney also promised to insist that Washington "learns to respect the Constitution, including the 10th Amendment," and said the responsibility for dozens of government programs will be returned to the states beginning "with a complete repeal of Obamacare."

He mentioned his time as the leader of the 2002 Winter Olympics in Salt Lake City as helping to prepare him to run the county, along with his business experience and term as governor of Massachusetts.

Visit msnbc.com for breaking news, world news, and news about the economy

Just two weeks ago, Romney raised $10.25 million in a single day by having prominent supporters from around the country staff a phone bank in Las Vegas. A number of Utahns participated, including Rep. Jason Chaffetz, R-Utah.

Utahns backed Romney's 2008 presidential bid in a big way, donating millions of dollars to his campaign and giving him an unprecedented 90 percent of the vote in the state GOP primary over McCain.

Romney earned that support by turning around the troubled Salt Lake Olympics. The Brigham Young University graduate was brought in to run the Olympic organizing committee at the height of an international bid-buying scandal that had shamed the state.

After the Olympics ended, Romney returned to Massachusetts and successfully ran for governor. His previous political experience had been a failed bid in 1992 to unseat the late Sen. Ted Kennedy, a powerful Democrat.

His 2008 race drew national attention to his LDS faith. Romney ended up giving a major speech on religion in Texas to answer some of the questions raised, especially from evangelical voters who don't consider Mormons fellow Christians.

Both Romney and Huntsman are expected to be campaigning in New Hampshire on Friday. Romney will hold his first official town hall meeting as a 2012 presidential candidate at the University of New Hampshire in Manchester Friday morning.

Huntsman, who has yet to announce whether he is running for president after serving as U.S. ambassador to China, is scheduled to be in the Granite State through Sunday, starting with a speech some 50 miles away from Manchester at a GOP gathering aboard a boat Friday evening.

This story was reported from Salt Lake City