Huntsman was responding to a question about whether he was a practicing Mormon posed by the ABC morning program's host George Stephanopoulos on behalf of a Salt Lake City viewer.

"I believe in God. I'm a good Christian. I'm very proud of my Mormon heritage. I am Mormon," Huntsman, a likely GOP presidential candidate, said, according to an ABC News transcript.

I believe in God. I'm a good Christian. I'm very proud of my Mormon heritage. I am Mormon.

In his first network television interview since returning late last month from Beijing where he served as U.S. ambassador to China, Huntsman said he doesn't believe his religion will be an issue in the campaign.

Voters want someone focused "laser-like on jobs and keeping this economy moving forward in ways that will maintain our preeminence in the world," Huntsman said. "I think everything else that people like to talk about, in many cases, are less relevant. In fact, some are sideshows."

Religion was barely mentioned by voters Friday as Huntsman traveled across New Hampshire accompanied by a pack of national press, said Peter Spaulding, his top adviser in the Granite State.

"I don't think religion has ever been a major issue here," Spaulding said. "New Hampshire is pretty tolerant."

Huntsman, who stopped at a diner, spoke at a VFW hall and sat down for interviews with New Hampshire's largest newspaper and a TV station, is scheduled to give a commencement address Saturday at Southern New Hampshire University.

"Mormonism is an absolute catnip for national media. They can't get enough of it," Kirk Jowers, Hinckley Institute of Politics

Voters in New Hampshire may not be interested in Huntsman's faith, but others elsewhere will be.

"Mormonism is an absolute catnip for national media. They can't get enough of it," Kirk Jowers, head of the University of Utah's Hinckley Institute of Politics and an adviser to another LDS contender for the White House, Mitt Romney.

"I think Mormon candidates probably feel like it's not completely fair," Jowers said. "Most other people can get away with one more superficial answer. But that's the world Mitt Romney faced in 2008 and is still facing. That's what Huntsman will face going forward."

Romney ran into trouble in the last election with evangelical conservatives who don't view Mormons as fellow Christians. The former Utah Olympic leader responded by embracing his Mormon faith in a major speech on religion in Texas. "My faith is the faith of my fathers," Romney said then. "I will be true to them and to my beliefs."

CNN's John King raised the issue in an interview with Huntsman later Friday, asking how he would answer questions raised about his faith by those evangelical Christians who see the church as a cult.

Huntsman told King, "People are worried about the real issues and less about someone's heritage or background," according to a transcript released by CNN.

Pressed, he said he would tell them, "I believe in God. I'm a good Christian. I — I'm proud of my roots. You have to take me for what I am and make a decision based upon that. Take a look at my family, take a look at my values."

Huntsman's declaration he's Mormon comes a week after an interview in Time magazine, where he said it was "tough to define" whether he still belonged to The Church of Jesus Christ of Latter-day Saints.

A spokesman for his "campaign in waiting" quickly issued a statement after the Time interview was posted online last Thursday, saying Huntsman "remains a member of the church and proud to be part of the fabric of a large, vibrant faith." 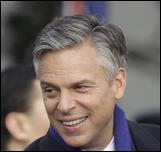 The issue of whether Huntsman was attempting to distance himself from his faith to avoid the problems faced by Romney, has attracted plenty of attention in Utah.

"It sounds like he's still trying to distance himself from any Mormon orthodoxy," said Matthew Wilson, a professor at Southern Methodist University in Dallas who specializes in religion and politics. "He clearly seems to be trying to hold the church at arms length."

Wilson said Huntsman's latest comments won't play well with many GOP primary voters, because he'll not just be seen as less Mormon, but also as less religious. "Secularism isn't going to do him any more good than Mormonism," Wilson said.

"He's just trying to be seen in a different light," Monson said. "I don't think we're viewed as sort of average America."

Huntsman has never been "the home-grown Utah boy, 100 percent," Monson said. "He's always kind of had one foot in and one foot out," he said, noting Huntsman, who now lives in Washington, D.C., left the state on a number of occasions, to attend college in Pennsylvania and serve previous GOP administrations.

"He has those experiences. He is broader than Utah," Monson said. "He always has been."

Friday, Politico posted an article suggesting Huntsman also chose Orlando, Fla., as the site of his likely presidential campaign headquarters to put some distance between himself and the "Mormon establishment."

While Florida might make sense politically, the online political news source said "the location — and some recent remarks about his faith — have combined to produce a sharp reaction from the Mormon establishment, solidifying the impression for many of the former governor's constituents that he plans to keep his distance in more ways than one."