That means police throughout the state, for now, may not ask people arrested for felonies and class A misdemeanors and those booked into jail on class B and class C misdemeanors about their status in the country as outlined in HB497.

U.S. District Judge Clark Waddoups made the temporary restraining order effective until he orders otherwise. The bill was to become law Tuesday. 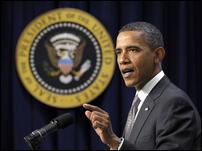 President Obama's outline of his plans for federal immigration policy offers a hint he's been paying attention to Utah.

"We think it was a very responsible approach to take given the constitutional deprivations that would have occurred if HB497 were to go into effect immediately," said Darcy Goddard, an attorney with the ACLU of Utah.

The ACLU and the National Immigration Law Center represent several Latino individuals and organizations who sued the state over the bill Utah lawmakers approved earlier this year. The class-action lawsuit contends the measure is unconstitutional in several ways, including violating rights against unreasonable searches and the right travel freely.

"The ruling will soften the effects, but the damage has already been done," said Juan Manuel Ruiz, president of the Salt Lake-based Latin American Chamber of Commerce, one of the plaintiffs in the case.

"As it is, many (Latinos) have already thought about leaving the state. Whether immigrants are lawful or not, the message is we're not sure if we want you here."

Assistant attorney general Jerrold Jensen offered little resistance to Goddard's arguments in favor of the restraining order, though he did attack the lawsuit as trying to paint Utah with an Arizona brush.

As it is, many (Latinos) have already thought about leaving the state. Whether immigrants are lawful or not, the message is we're not sure if we want you here.

"They're trying the Arizona law," he said after the hearing. "They make a lot of allegations about the Utah law that aren't true."

Utah legislators, she said, made only "cosmetic" changes to the Arizona law, billed as the strictest illegal immigration enforcement measure in the nation. The Department of Justice sued Arizona, blocking its controversial enforcement provisions.

The Arizona law requires police to question people's immigration status while enforcing other laws if there is a reasonable suspicion they're in the country illegally. It also requires all immigrants to obtain or carry immigration registration paper and makes it a state criminal offense for an illegal immigrant to seek work or hold a job.

President Barack Obama is making his first trip as president to the U.S.-Mexico border, using the setting to sharpen his call for a remake of the nation's immigration laws and try to cast the GOP as the obstacle standing in its way.

Jenson said those provisions were avoided to ensure the Utah statute does not regulate immigration, which is the federal government's purview. "Just because the Arizona law may be unconstitutional doesn't mean the Utah law is unconstitutional," he said.

"People have been very scared about this," he said. "They don't know what to do."

Though initially based on the Arizona law, bill sponsor, Rep. Stephen Sandstrom, R-Orem, revised HB497 nearly a dozen times over several months, including removing the controversial phrase "reasonable suspicion," before the Legislature passed it in March. He steadfastly maintains it is not the Arizona bill.

In a statement after the court hearing, Gov. Gary Herbert said the Utah attorney general's office and the Legislature worked hard to craft a bill that would withstand constitutional scrutiny

"Utah will have ample opportunity in court to demonstrate this bill is on solid footing," he said. The lawsuit names Herbert and Utah Attorney General Mark Shurtleff as defendants.

While not judging the merits of the lawsuit, Waddoups ruled it raises questions that deserve to be resolved in a deliberate manner. He scheduled a July 14 hearing on the ACLU's request for a preliminary injunction, which, if granted, would stay enforcement until the case is decided.

The Justice Department has hinted it might sue the state as it did Arizona.

"It's possible they'll do that here, too," said Goddard, declining to comment on whether she has talked to federal lawyers. She noted that it was the ACLU and National Immigration Law Center that initiated litigation in Arizona before DOJ jumped in.

Story written by Dennis Romboy with contributions from Richard Piatt.