SALT LAKE CITY -- As students make their way through colleges and universities, some are concerned about proposed cuts to financial aid programs.

President Barack Obama proposes to cut $100 billion from Pell grants, the federal student aid program. It would shave funds from the program over the next 10 years. 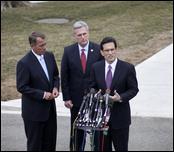 President Barack Obama's budget plan would cut $100 billion from Pell Grants over a decade through belt-tightening but use the savings to keep the maximum college financial aid award at $5,550, an administration official said.

"What does the government want us to do when we're older," says Morris. "Do they want us to run the country if we have no education behind us. Do they want stupid people running the country? I don't think so."

Morris is from California. She says she has seen a progressive decline in resources for education.

"Through my high school I saw how terrible it was getting just by seeing teachers being taken away and fired from their jobs," says Morris. "And I got to see how the resources that we had are being so limited."

Archibald says there needs to be sufficient funds for students to get an education but the money also needs to be spent wisely.

The Pell grant is federal financial aid given to students in a lower income group, to help them complete their bachelor's degree.

Student Spencer Peacock says his generation should start relying on themselves for future success rather than government aid.

"Money for college is a wonderful thing and it's great and all," says Peacock. "But it's a part of life and honestly we just need to suck it up. As messed up as that sounds, that's how I feel."

He's not concerned over the proposed cuts to the Pell grant program.

"Life is difficult no matter what. I work all the time to support myself anyways," says Peacock. "But we learn life lessons through hard work."

Student Holly Nielsen says a lot of students are finding themselves in a tough spot because they want to get an education but are reluctant to get into debt over it.

"No one has the money to pay for school. They're constantly working to get enough money," says Nielsen. "And a lot of people don't want to take out loans because they have to pay it back. It's a constant money thing more than anything."

While she says some of her education is covered with grants from the Veterans Administration, she's not worried about cuts to the Pell grant program.

"It's nice to get money especially for college," says Nielsen. "You need to work for your education. You learn better when you work and pay for what you're going to get."

Analysts say President Obama's proposed budget plans are pretty centrist, which means, people on either side of the political spectrum are not going to be happy with his budget plans.