Lee on joining US Supreme Court

Lee on his new role

Lee on assimilation into court

Justice Thomas Lee replaces retired Justice Michael Wilkins on the Utah Supreme Court, who retired in May. Lee was confirmed last month by the Utah Senate to serve as associate justice and sworn in on Monday.

U.S. Supreme Court Justice Clarence Thomas gave Lee the oath of office. Lee once clerked for Thomas as well as for appellate Judge Harvey Wilkinson III. Lee says since that time, serving as an appellate judge is something he has looked forward to. 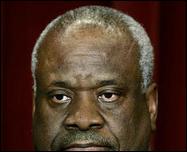 U.S. Supreme Court Justice Clarence Thomas paints a portrait of duty and isolation in describing what life is like for the nine justices of the nation's high court.

"Two of the men I've looked up to the most in my career are Judge Wilkinson and Justice Thomas, and this is a great day for me because I know have the opportunity and hopefully follow in their footsteps to some degree," Lee said.

Thomas says Lee is perfectly suited for the office, citing his disposition, character, experience and nature. Friends and former colleagues of Lee's spoke of his achievements and dedication to the law at the ceremony.

Once Lee had been sworn in, his wife helped him put on his judge's robe.

"It was a good feeling," Lee said. "I've looked up to people who have donned black robes all my life, and I don't quite feel worthy to wear it myself but I hope to grow into the robe."

He says his role on the bench is to implement the will of the legislature.

Lee said he looks forward to exercising an independent voice and working with what he calls "four brilliant jurists" on the Supreme Court.

Lee is a law professor at Brigham Young University and an attorney in private practice. He joined BYU's faculty in 1997 and has published articles on trademark and copyright law. Lee is also a former deputy assistant attorney general at the U.S. Department of Justice.

Lee's brother, Mike Lee, is the Republican nominee for a U.S. Senate seat from Utah.