No one is more stunned about Huntsman's appointment than Herbert. The 62-year-old Orem Republican has long had ambitions to run for governor, but dropped a brief campaign in 2004 to accept the No. 2 spot on Huntsman's ticket.

I really do believe I come to this point very well prepared.

He said when he took the call late Friday from Huntsman in Washington, D.C., he had no idea the governor was planning a sudden career change.

Herbert realizes that very soon, the buck will stop with him. Saturday he was judging cars at the Classic Car Expo in Lehi. He says becoming governor will be a little humbling for him.

"It's a challenge. It's an opportunity. I really do believe I come to this point very well prepared," he said.

Herbert is among many people who call Huntsman's appointment a coup for Utah and the nation.

Political chatter on how Herbert will govern

Some political observers say Huntsman and Herbert were an unlikely pair from the start and that it became obvious recently as Huntsman succeeded in liberalizing Utah's liquor laws and adopted positions in favor of reducing greenhouse gas emissions and civil unions for gay couples. 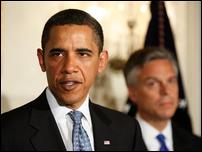 Ideologically more conservative than Huntsman on those social issues, Herbert still says the two are complimentary. "I would prefer to say that Governor Huntsman and I are more similar than we are different," he said.

Herbert said his biggest and most immediate challenges will be dealing with the economy and budget deficits. He promises to avoid major changes when he takes over and says he wants to build on Gov. Huntsman's platform.

That's good news for most legislators KSL talked to Saturday. In spite of differences on a few social issues, House Majority Leader Kevin Garn says Huntsman will be missed.

"Overall, we've agreed with him more than we've disagreed with him. I think he has been a great leader for the state of Utah. He's done great things for our economy," Garn said.

At the Capitol, a lot of people appreciated Huntsman's willingness to listen. Sen. Scott McCoy, D-Salt Lake City, hopes the philosophy of the present administration carries over.

"I hope that Governor Herbert, if it comes to that, will actually embrace that philosophy that he represents all the members of the state of Utah," McCoy said.

Herbert plans to run in a special election in November 2010, and then run again for a full four-year term in 2012.

He's likely, however, to face rivals from his own party and such popular Utah Democrats as U.S. Rep. Jim Matheson or Salt Lake County Mayor Peter Corroon.

No Democrat has held the governor's office since 1985, but Utah Democratic Party Chairman Wayne Holland said Herbert's "ultraconservative" credentials will allow a Democratic challenger to appeal to a broader segment of voters.

Gov. Huntsman and Lt. Gov. Herbert are planning to talk about the transition of power in a news conference scheduled for Monday.

Compiled with information from Richard Piatt, Andrew Adams and The Associated Press.