ST. GEORGE -- Two sisters were killed Wednesday afternoon when their car was T-boned by a Utah Highway Patrol vehicle near 900 S. River Road.

There wasn't much left of their Buick. Police say Gummow was turning into a church parking lot, in front of a trooper. Their cars collided. 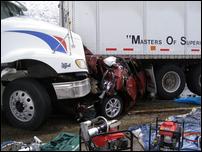 Multi-car accident kills woman, shuts down I-15 for hours

A fatal accident involving several vehicles shut down part of Interstate 15 near Cedar City Wednesday. It happened around 12:30 p.m., forcing crews to close the freeway for five hours.

"He was using his emergency lights and sirens, so he would have been traveling at a high rate of speed. What exactly that speed is, we don't know," said St. George police Lt. James Van Fleet.

Gummow and Moore lived together, only several blocks from the crash site. Neighbors said they were on their way to a church meeting. They said Gummow did all the driving because her sister had diabetes and used a walker.

"They were pretty -- kept to themselves, and were nice ladies," said neighbor Nathan Smith.

Police say the trooper was on his way to help with a crash on Interstate 15, near Black Ridge.

Officers say the trooper was transported to the hospital with non-life-threatening injuries.