Fredette and Emery turned a one-point game into a rout with six minutes to play when each hit back-to-back three-pointers. Fredette added two free throws to complete the 14-2 run, after which the Cougars led 72-59.

BYU (5-0) improved to 18-0 against Weber State all-time at the Marriott Center. 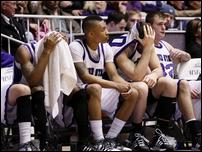 weber.jpg Wildcats looking for silver lining in loss to BYU

Despite a disappointing loss to a good BYU basketball team, the Weber State Wildcats are proving one thing; they are a tough, persistent team.

Damian Lillard led the Wildcats (1-4) with 23 points and Lindsay Hughey scored 16. Each made four 3-pointers for Weber State.

Emery made 4 of 6 three-point attempts and Fredette made 3 of 5.

The Cougars jumped to an early 18-4 lead with torrid shooting, but Weber State built a comeback around offensive rebounds and drives to the basket by Lillard and Hughey.

Lillard converted a three-point play and made one of his four 3-pointers to give Weber State a 43-40 lead. The teams traded the lead until Hughey nailed a 3-pointer to pull Weber State within 58-57.