SALT LAKE CITY -- A downtown car dealership has some expensive repairs to make after someone slashed tires on close to 30 cars overnight at the Ken Garff at 550 South and 200 East.

Someone went down the line of Saabs, Land Rovers, Corvettes and Porsches and slashed the left front tire of each one--they now lean crippled to the left.

It happened about 3:00 or 4:00 Monday morning. About the same time, someone broke into Ken Garff Volvo around the block. The burglar tore off some side mirrors and stole an expensive bike. 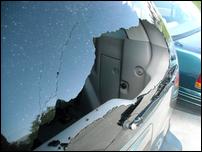 Authorities in Davis County are investigating a series of shootings that shattered dozens of car windows.

"You know, it's gut-wrenching to come in and see that this has happened, and know what's going to have to take place, and know what we're going to need to do and the money it's going to cost," Johnson said. Not only does it hurt us, it hurts the insurance company, and therefore it trickles on down. It hurts all of us."

Johnson said all four of the tires on the 4-wheel drive vehicles will have to be replaced to make sure tread and wear are even. He said it will cost upwards of $20,000

"It's crazy why someone would want to come in and do this," Johnson said. "It's a disgusting thing that's taking place in the city."

Police hope someone will boast and then be turned in, or that surveillance video will reveal a suspect. At this point, there are no suspects and no idea on a motive.

Anyone with information is asked to call the Salt Lake City Police Department and 801-799-3000.

Story compiled with contributions from John Daley and Mary Richards.