SALT LAKE CITY (AP) -- Lt. Gov. Gary Herbert is preparing for the most important speech of his political career.

Herbert takes over as Utah governor on Tuesday during an inauguration ceremony set for noon. 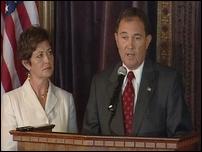 Herbert's speech will help define his administration ahead of a 2010 special election. The speech will be his best opportunity yet to connect with voters, rally political donors and send a message to potential challengers that he shouldn't be underestimated.

Herbert's spokeswoman, Angie Welling, declined to say what Herbert will cover in his speech, but she says it will include some priorities for his administration.

Those will likely include improving economic development and education.