"We are excited to begin fall camp and get ready for the season," BYU head coach Bronco Mendenhall said. "We have great young men on our team and a good mix of experienced players and talented newcomers. I anticipate this group will work hard and help us build upon the past achievements of our program." 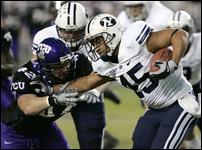 For the first time in the BCS era three teams from a non-automatic-qualifying conference have appeared in the preseason Coaches' poll.

As part of reporting on Friday, several roster items were announced.

Starting defensive tackle Russell Tialavea officially announced he will return to play this season before departing for a two-year mission in Santiago, Chile, for The Church of Jesus Christ of Latter-day Saints.

Tialavea, who previously announced he could leave before the season, is scheduled to report for his mission on Dec. 30.

Wide receiver Tyler Kozlowski has decided to discontinue playing football to concentrate on school and other priorities. He earned lettermen honors as a freshman and sophomore while appearing in 25 games primarily on special teams.

Junior Jadon Wagner, who has moved from linebacker to defensive end since last season, was diagnosed with mononucleosis Wednesday and is expected to be out for three weeks.

Coach Mendenhall also confirmed that cornerback Brandon Howard has decided not to return for personal reasons and defense end recruit Thomas Bryson will be out for fall camp recovering from surgery.

The first practice Saturday begins at 3:30 p.m. for newcomers and 4 p.m. for veteran players.

Fall camp will conclude the last week of August when the team begins official preparations for its season opener against preseason No. 3-ranked Oklahoma on Sept. 5 at Dallas Cowboys Stadium in Arlington, Texas.