President Barack Obama nominated Huntsman for the job two months ago. Since then the governor has been the subject of an intense vetting, or cross-checking process.

During that process, Senators have quizzed him about how and what he would take on as ambassador to China and investigators have been doing extensive background checks. 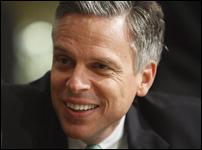 The checks are crucial because of the nature of the job Huntsman is about to take. China is a major power; key to solving global issues involving trade, war and environmental issues for generations to come.

There is a political dynamic too: A Republican governor nominated to key position by a Democratic president. Senate sources say key members now share President Obama's confidence in Gov. Huntsman.

"Throughout his career, Jon has shown a willingness to move beyond the old ideologies and stale debate that all to often bring progress to a standstill," President Obama said when he nominated the governor to the ambassadorship.

"I think it's going to be fairly softball, unless there's something none of us has seen, which is very unlikely," said consultant Tom Korologos.

Korologos is a former Utahn and former ambassador to Belgium. He says Huntsman has been through these hearings before, so he should know the 80-20 rule.

"The senators speak for 80 percent of the time and you speak for 20 percent," Korologos explained.

Huntsman is in the nation's Capitol Wednesday, but is still unable to comment to reporters about the proceedings.

At a news conference May 18, however, Huntsman stated how stressful and rigorous the process is and how painful the decision to move across the world has been for his family.

Shortly after the full Senate votes on Huntsman's appointment, Huntsman will resign and the state of Utah will inaugurate its next governor, Gary Herbert.

That could happen as early as next week.

Story compiled with contributions from Richard Piatt and Mary Richards.