No. 8 Utah falls to No. 11 Penn State in Rose Bowl after Rising's early exit 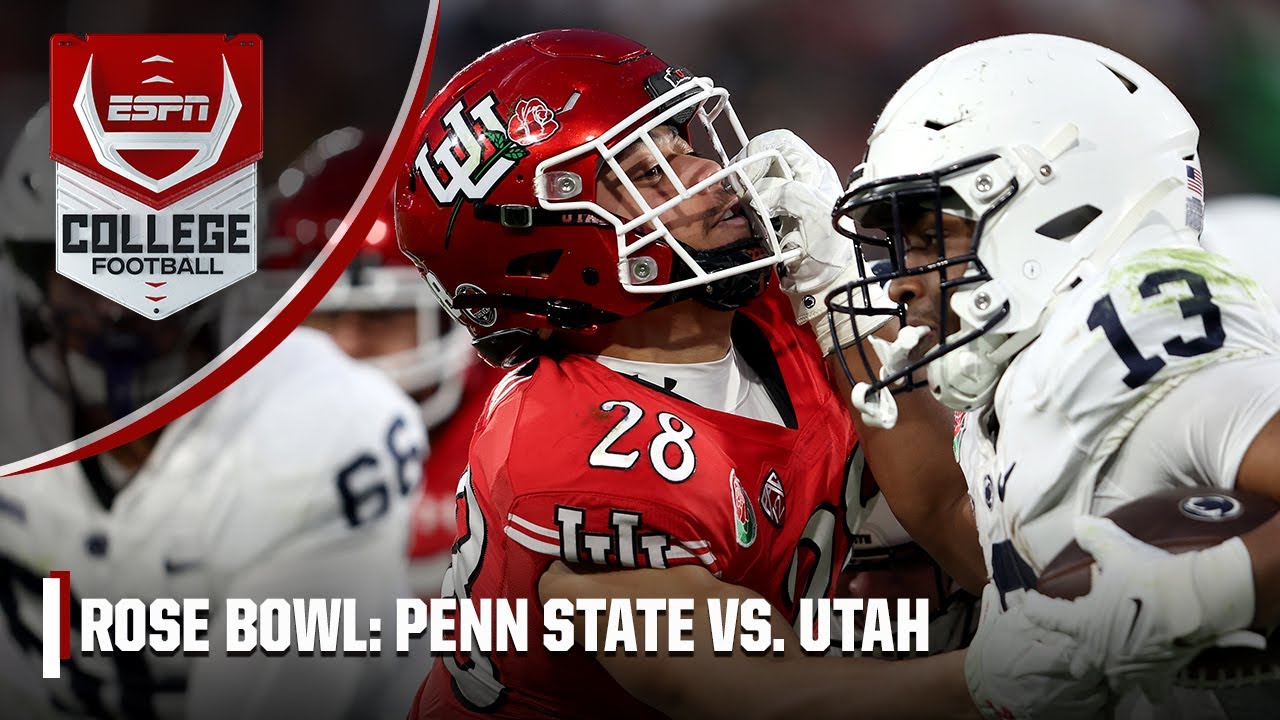 PASADENA, Calif. — For the second straight season, No. 8 Utah finished the Rose Bowl without its starting quarterback; and for the second year, Utah lost the Grandaddy of Them All.

With 6:31 remaining in the third quarter and Utah down by 7 points, quarterback Cameron Rising escaped on a run in an effort to extend the team's drive and pick up a first down. As he picked up the first down, he was met by three Penn State players who stopped him in his tracks.

Rising attempted to jump back up to resume play, but he suddenly went back to the ground and needed attention from the training staff. He eventually walked off the field with a bit of a limp and went to the team's medical tent before eventually going back to the locker room. When he returned in the fourth quarter, he was in street clothes and his night was done.

"The injury to Cam is a leg injury; it doesn't look good, I can tell you that," Utah head coach Kyle Whittingham said. "We'll wait for confirmation from the medical people at a later date, either tonight or tomorrow. Looks like it could be something that takes a while to recover from. That's not positive right now."

The injury to Rising deflated a Utah team that was already reeling from a defense that couldn't stop big plays from No. 11 Penn State.

"It almost seemed we lost a little bit of our mojo when that happened," Whittingham said. "We had a little bit of a deflation on our team, and that's not the right way to respond. We needed to respond better than we did, and it's unfortunate that we didn't — that we had the drop off that we did."

Penn State smelled blood in the water after Rising left the game and attacked.

The Nittany Lions used a dominant fourth quarter to pull away and claim a 35-21 victory — the program's second ever Rose Bowl win — and send the Utes back home with another loss.

Utah QB Cam Rising headed back to the locker room after an apparent injury. pic.twitter.com/yqFkhkO1WZ

In Rising's absence, backup quarterback Bryson Barnes came onto the field for the second year in a row but lacked the magic from the 2022 game when he led the team back to a tie game against Ohio State. His first drive fizzled out and Utah was forced to punt.

Penn State quarterback Sean Clifford called game and delivered an 88-yard pass to KeAndre Lambert-Smith, who blew by Utah safety R.J. Hubert for the easy score and to give the Nittany Lions a 14-point lead. The Nittany Lions added to their lead in the fourth quarter on a 1-yard rushing touchdown by Kaytron Allen to take a 35-14 lead.

In the end, it was another Rose Bowl game where Utah's secondary couldn't keep up with the opposing team's offense in a loss. And it was a Utah offense that struggled to capitalize in the moments it had.

"When you look at us and our issues in this game, didn't throw the ball efficiently enough, not nearly as efficiently as we've been throwing it all season long," Whittingham said. "Defense got big played. That's evidenced by over 400 yards of offense by Penn State. Only 15 first downs; that's not a lot of first downs, which means they're getting some big-chunk-yardage plays, which definitely led to our demise."

Utah's defense started out the game strong and held Penn State's offense to a three-and-out series, but the Nittany Lions answered later in the first quarter after Rising threw an interception. Penn State went 82 yards in 12 plays and capped off the drive with a 5-yard rushing touchdown off the T-formation.

The Utes answered with a 1-yard passing touchdown from Rising to tight end Thomas Yassmin, and then later added another score when Ja'Quinden Jackson equalized after another Penn State score, thanks to a spin move while receiving a pass from Rising that broke a few tackles before he found the end zone for Utah's second touchdown of the game.

But it was all Utah could get for much of the game after Rising went out after throwing for 95 yards on 8-of-21 passing. Barnes struggled to handle Penn State's physical defense that broke through the offensive line and quickly got into the back field. At that point, it was as if Utah raised the white flag and conceded.

Barnes did orchestrate one final scoring drive that was capped off on a 5-yard passing touchdown to Jaylen Dixon to close the gap, but it was too little, too late. Barnes finished throwing for 112 yards and an interception on 10-of-19 passing for the Utes.

Clifford finished a six-year career at Penn State throwing for 279 yards on 16-of-22 passing on Monday. He was subbed out of the game with just under three minutes left to play to an emotional crowd that gave him a standing ovation in a final performance for Penn State.

Singleton led Penn State with 120 yards and two touchdowns on seven carries on a night the Nittany Lions rushed for 169 total yards.