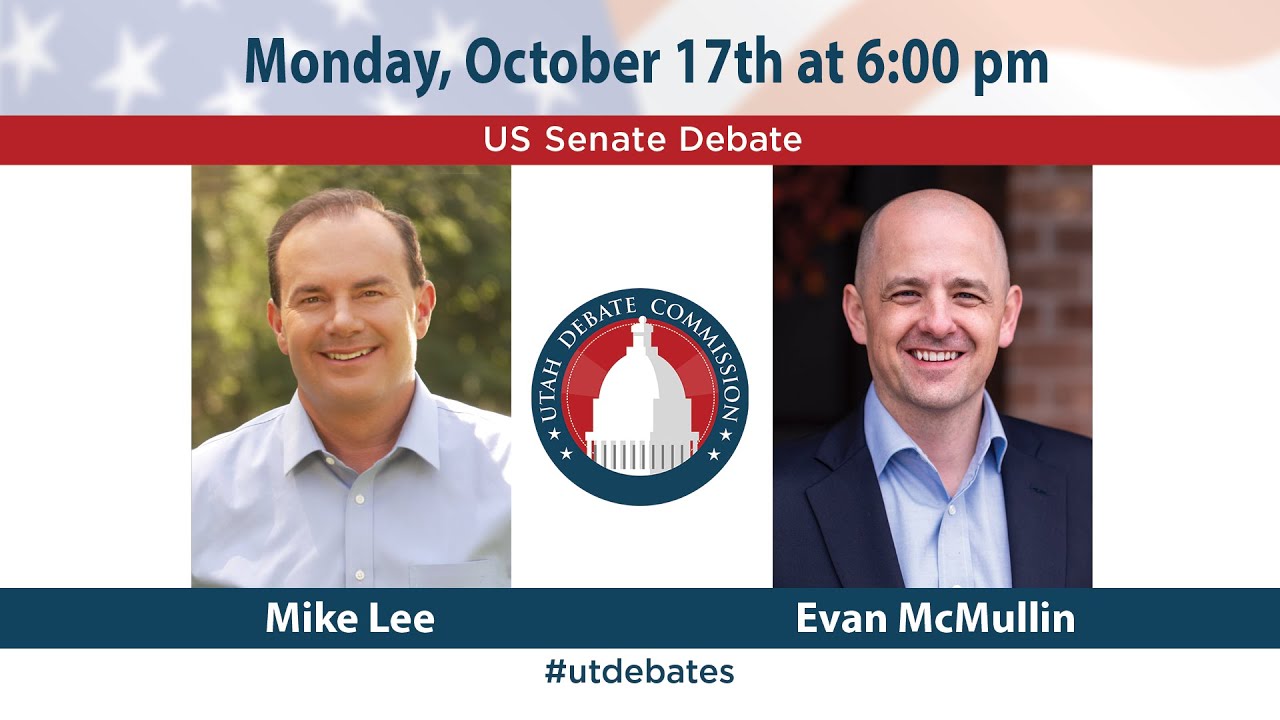 OREM — Utah Sen. Mike Lee and independent challenger Evan McMullin dug at each other, especially when it came to the Constitution, the Capitol riot and Donald Trump, during a sometimes heated debate Monday night in the race for the Senate.

Both candidates relied on attacks and deflections they have used against each other in news stories, social media and television ads throughout the contentious campaign, but this time they were face to face — for the first and only time this election — at Utah Valley University. The race is one of the most competitive statewide contests Utah has seen in years.

McMullin pounded on Lee over his White House text messages following the 2020 presidential election, saying his "egregious" effort to find fake electors to keep Trump in office will be his legacy. Lee sharply disagreed with McMullin's characterization. He said there wasn't a "scintilla" of evidence to support the claim and demanded an apology.

Lee often turned to look at McMullin with a smile that the challenger called a "smirk" at one point during the hourlong debate sponsored by the Utah Debate Commission. In another moment, Lee pulled out his pocket Constitution, as he is known to do. McMullin said Lee uses the document as a prop. Lee said he uses it as a ready reference that his colleagues in Congress also appreciate.

The decidedly pro-Lee audience applauded Lee a couple of times during the debate and booed McMullin once, prompting moderator Doug Wright to ask for quiet.

The exchange brought out the differences in how Lee and McMullin would approach the job in Washington.

Lee said he would continue to vote no on legislation he finds bad for Utah and the country. Utah, he said, needs to elect a Republican to help the party take control of the Senate to counter President Joe Biden's progressive policies and runaway spending. McMullin, he said, voted for Biden and the Democratic Party is his "adopted" political party.

McMullin said as an independent, he would work with Democrats and Republicans to find solutions in the vein of Utah GOP Sen. Mitt Romney. He said his vote would be valuable in the Senate because he belongs to neither party. McMullin accused Lee of being beholden to party bosses and special interests.

McMullin said he would not be a "bootlicker" for Trump or Biden. Lee said he called out Trump "all the time," especially on spending bills.

The candidates covered a wide range of issues during the debate. Here are some of them:

Since the U.S. Supreme Court returned the decision about abortion to the states, McMullin said he wants to find a constructive way forward. He said he's pro-life and opposes the extreme laws on both sides of the issue: Those allowing late-term abortions and those that would ban abortion without exceptions. He said he favors making more contraception available and doing more to support women, children and families to lower the abortion rate in the country.

Lee said Roe v. Wade was a "legal fiction cut out of whole cloth by the imagination of a few Supreme Court justices." He said the authority to determine abortion law was rightfully returned to the states. States, he said, can reach the most consensus on the issue and protect the most babies.

"We also need a Republican offset to a president who's not all there," Lee said, noting Biden has talked recently about Armageddon.

McMullin said the U.S. has to strengthen its relationship with other free nations and that trade is critical, especially in the Pacific Rim. He also favors investing in new technologies.

Utahns like Evan McMullin a little more than Sen. Mike Lee, according to a new poll, but he still slightly trails the Republican incumbent in the heated U.S. Senate race.

"We need to elect leaders and representatives of this freedom-loving state that will stand up to foreign dictators and not enable them," McMullin said

McMullin said Lee is the only member of the Utah congressional delegation not to be blacklisted by Russian President Vladimir Putin.

Lee replied he doesn't know why Russia hasn't blacklisted him, but "I'd love to be blacklisted there," adding that China has banned him for life.

Lee said the federal government needs to get out of the college loan business. Biden, he said, has no power to forgive student debt. The only reason the government got into student loans was because Democrats wanted to fund Obamacare, he said. It borrows money at a lower interest rate and loans it out at a higher interest rating, "milking American students all over the country," Lee said. Student loans, he said, need to return to the private sector.

McMullin said the federal government has played a "tragic" role in elevating the cost of college, which is now out of reach for many Americans, including the middle class. He said he disagrees with Lee that the federal government should be out of student loans but it has to be more careful. He favors debt forgiveness for public service workers such as teachers, police officers and members of the military.

McMullin said both political parties are to blame for inflation. "Where was Sen. Lee when President Trump was spending recklessly in an expansionary period?" he said. McMullin said he would work across party lines to get spending under control, rather than simply voting no.

Lee said inflation is the result of reckless federal spending. He said he's been a leading opponent of excessive spending during his tenure in the Senate. Democrats, with control of Congress and the White House, have ratcheted it up to a whole new level, he said.

"We thought it was too much cowbell before. They gave it 10 times the cowbell," he said.

Other than an ad pointing out that McMullin voted for Biden, Lee said his ads have been about himself. McMullin, he said, has "refused" to talk about ideas, but is asking voters to put "blind trust" in him.

"I talk about my ideas in my ads. I would suggest you do the same," Lee said.

Ads from outside groups, he said, don't use the same messaging he uses. "Yours are attack hits, hit pieces every single one of them."

McMullin said a "far-right group" that Lee is beholden to ran an ad that doctored his words to make it say something that he didn't, referring to a Club for Growth ad.

"Sen. Lee, why can't you condemn that? Do you need the lies?" McMullin said.

McMullin said the ads on his side have been "quite fair" in talking about Lee's votes in the Senate.