A man who police say told detectives that his girlfriend shot herself multiple times, causing fatal injuries, has been charged with murder. (rawf8, Shutterstock)

SALT LAKE CITY — A documented gang member accused of fatally shooting his girlfriend in her apartment and then telling police she shot herself, according to prosecutors, is now facing numerous criminal charges.

On Sept. 25, Salt Lake City police responded to a shooting at an apartment at 718 N. 900 West. They arrived to find Lyberdee Cisneros, 24, had been shot at least twice, according to charging documents. Officers found Fernelius, Cisneros' live-in boyfriend, also in the apartment and found he had a gun in his front pocket, the charges state.

Cisernos died of her injuries at a local hospital. While detaining and questioning Fernelius, police say he changed his story multiple times, claiming at different times that Cisneros shot herself in front of him, that he wasn't in the apartment when she was shot, and that someone else shot her, the charges state.

"At the end of the interview, Fernelius asked the detective to remove his handcuffs and when he was denied he told the detective, 'I will shoot you too,'" according to the charges.

A witness told police he heard gunshots coming from the apartment and when he went to investigate, Fernelius answered the door and Cisneros was seen "lying face down on the floor in the living room in a pool of blood," according to the charges. 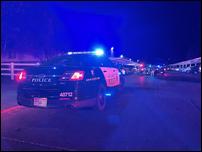 A woman who was critically injured in a shooting at 718 N. 900 West in Salt Lake City on Sunday has died from her injuries, police said.

The witness stated that he told Fernelius to call 911 multiple times before he finally did. An autopsy determined that Cisneros did not die of a self-inflicted wound, the charges state.

"The evidence is inconsistent with self-inflicted gunshot wounds," prosecutors stated in charging documents while noting that Cisneros was shot multiple times. "(Fernelius) changed his story multiple times. Each different version of (his) story that the victim shot herself was contradicted by evidence that this was clearly a homicide."

Prosecutors have requested that Fernelius, a known member of a violent street gang, be held in the Salt Lake County Jail without bail pending trial, noting in charging documents that he "is quick to violence and anger as evidenced by his threat to a police detective to 'kill you, too' when told his handcuffs wouldn't be removed. There is also evidence of prior violent domestic violence-related conduct between the victim in this case and (Fernelius) as was observed in recovered phone data recordings."