WEST VALLEY CITY — The mother of 11-year-old Slate Mickelsen is speaking out after tragically losing her son in a hit-and-run crash.

Mickelsen lived in Ephraim with his dad but was visiting his mother in West Valley City at the time of the crash. Instead of getting him ready for school, his parents are in Ephraim now preparing for his funeral.

"It's just amazing the amount of people that he influenced their lives in just 11 years," said Mickelsen's mother, Lisa.

Mickelsen's parents called their son a child with no fear.

They remember the day he came home from the hospital after being born.

"December 5, but he was so little that he fit inside of a Christmas stocking," she said.

They said he loved riding his bike and trying new things.

"He played Beethoven in our car instead of rap music," she said.

He was visiting his mom at her new place in West Valley City last week. They decided to take a tour of Salt Lake City together.

"We'd just come from seeing the Capitol building," she said.

She said they got off the bus and walked down the street to her house.

She said her son was hit and killed just one block away from home.

"I looked at the truck and I looked back and my boy wasn't there. I said, 'Slate,' and then I saw him; he was lying under the tree. I rolled him over and immediately started CPR."

I said, 'Slate,' and then I saw him; he was lying under the tree. I rolled him over and immediately started CPR.

She said she doesn't remember much else.

"I knew right away that he was already gone," she said. "He was gone before the ambulance got there."

She said her driveway camera caught a glimpse of a truck speeding off.

"You don't leave the family wondering why. Why did he drive off the road right there at that second? Why is my little boy dead?" 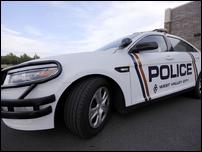 With the help of watchful residents, police have arrested a man who they say left the scene after hitting and killing an 11-year-old boy with his pickup truck on Wednesday.

She said her son paid a life sentence, but she'll hold onto their last moments together.

His parents decided to donate some of his organs. They said it will help bless another child's life.