Behind Jaren Hall, returning O-line, BYU may be best team 'no one is talking about' 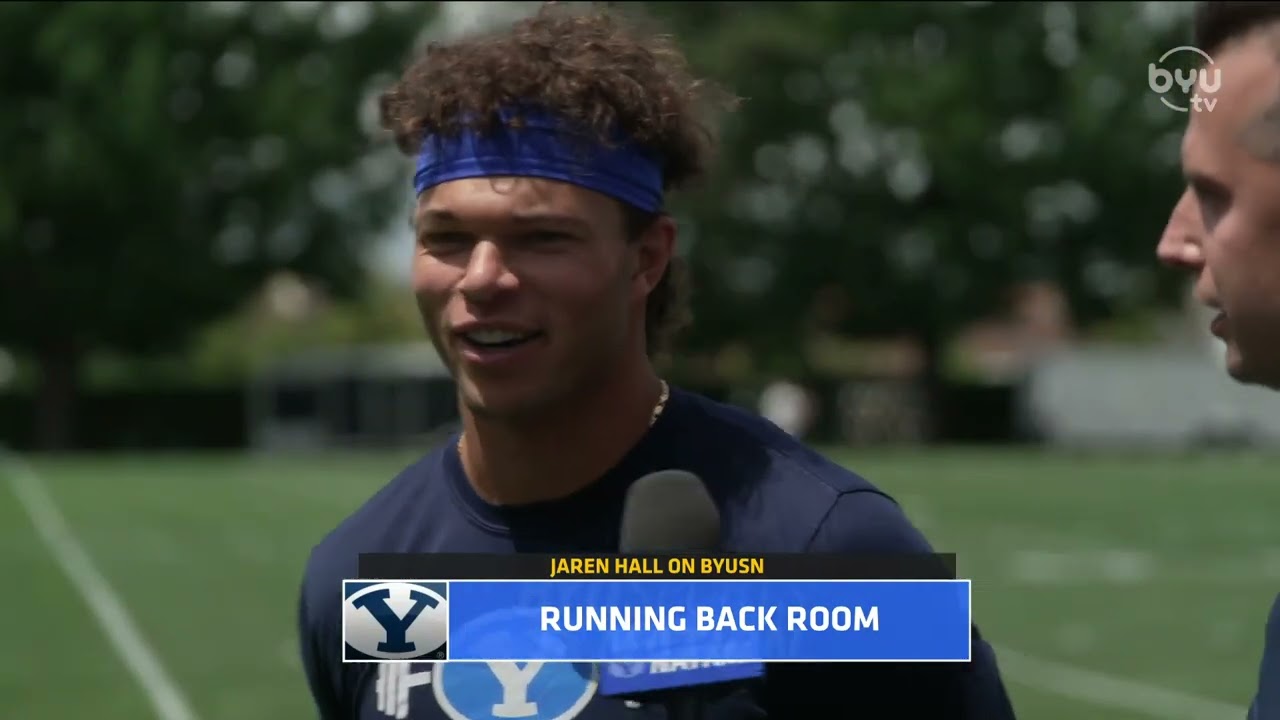 PROVO — There's a quiet confidence surrounding Jaren Hall as he takes the reigns as QB1 of the BYU football team through the first week of training camp, and few would blame him.

The junior quarterback for the Cougars is entering his second camp as the team's No. 1, but first as unquestioned starter on a squad that returns more production than any in the country, according to ESPN.

A year after throwing for 2,583 yards and 20 touchdowns with an efficiency rating of 156.07 that ranked No. 23 nationally, the bravado is more than just bluster. But even the 6-foot-1, 205-pound signal caller knows the real reason for his team's success.

"I saw the O-line, how clean the pocket is, how well we ran the ball today," Hall said after one early practice. "We don't have pads on but they're moving dudes. It's no secret you know that's our strength of our team — and has always been."

The expectations are high in Provo, where BYU returns 10 of the 11 starters on offense, in addition to numerous offensive linemen with starting experience and running back Lopini Katoa, who saw spot starts over the years before now-Atlanta Falcons tailback Tyler Allgeier powered through opposing defenses in 2021.

"You can definitely tell these guys are experienced," Hall said. "The first guys out, they've been here for 2-3 years, whether here or other schools. It's a very experienced offense."

But Hall knows where his bread is buttered, too: that offensive line, led by projected NFL left tackle Blake Freeland and center Connor Pay that averages 305 pounds across its massive front.

Indeed, behind Hall and an offensive line with 90 returning starts, the Cougars may be the best team that "no one is talking about," national college football reporter Dennis Dodd recently wrote for CBS Sports. After "somewhat quietly" winning 21 games the last two seasons that included a 5-0 record against the Pac-12 a year ago, BYU again has a schedule that includes the likes of Arkansas, Baylor, Notre Dame and Stanford that could make noise if guided successfully in its final season of football independence.

"Kalani Sitake's steady hand made the Cougars worthy of joining the Big 12. The five Cougars drafted in 2021 tied for the most at the school since 1986," Dodd wrote. "BYU has arrived (again). Have you noticed?"

Plenty of people have noticed, which is why the Cougars are a trendy pick on several ballots a week before the first Associated Press Top 25 preseason poll is released. BYU was four spots out of the first preseason coaches' poll released Monday; the first AP poll will be released Aug. 15.

BYU hasn't been ranked in the preseason since 2009, but with back-to-back top-20 finishes, that streak may end soon. If they are, Hall will be a big reason why.

If not, it just gives Hall and the offense another reason to prove themselves. Not that QB1 has anything to prove, at least according from his teammates' view.

"We know what to expect from him," wide receiver Gunner Romney said. "He's a baller. It's fun seeing him picking apart a defense again and I'm excited to watch him play a full game again."

The former Maple Mountain star and son of former BYU running back Kalin Hall (and perhaps an even more athletic mother Holly, a former BYU gymnast) has been working with acclaimed quarterback guru and former Cougar great John Beck all summer, though his travels to and from Southern California haven't received as much airtime on ESPN as those of ex-BYU signal caller Zach Wilson.

"I'm definitely utilizing everything I can from anybody who has something great to offer me," said Hall of training with Beck, as well as his longtime QB coach Dustin Smith. "I think it's great to take a little bit here and there, and just find what works for you.

"I think once you work with (Beck), you realize how applicable everything is to the game. It's not just drills where you do it in a box and you're just moving in a three-by-three space. Plus, playing at BYU and all those accolades he has, his reputation and the way he understands the football helps him understands it's not just what you do on the field. He's one of the brightest minds I've ever seen … and he's a great dude."

The difference has already been noticeable, with an increased poise in the pocket, command of the offensive playbook, and zip on the ball as he's begun what may be the final fall camp of his collegiate career. Hall hasn't made up his mind if he'll try for the NFL draft after this season, but he admits that's "everybody's dream" — and he's no different than the rest of college football with his desire to turn pro.

things we'll never get tired of ...

"He's a lot more vocal than he's ever been; he's earned that right, and he's got a knack for it," Roderick said after nearly a week of fall camp. "He's a natural leader. He knows how to speak to his team without sounding condescending; he does it the right way.

"He's as respected of a player as anyone I've ever coached … and we listen to him as a coaching staff. He's a really sharp guy, and has earned our respect."

Hall's routinely carried himself with a certain level of swagger, and the new father with a mid-80s golf game who frequented Utah County courses as much as anyone over the past two years has a new level of confidence as he prepares for his junior season. And it's merited.

Still, first things first: Hall's got to get better, and that starts with his work with Beck, through the summer, and into a fall where Roderick will tweak the Cougars' system to throw more diverse concepts at an experienced roster that also returns wide receiver Puka Nacua and adds Cal running back Christopher Brooks. The play caller even joked that he may play certain sets with more than five offensive linemen, due to the Cougars' depth at the position; anything is on the table with an established offense.

Nothing Hall can't handle, though.

"I think he's a lot more comfortable going into this year," Sitake said. "The focus for him is a little different than it was last year; I gave A-Rod the opportunity to just teach him, and the standards he has for him and expectations to accomplish. This summer, he did it. We'll see what happens for fall camp — but day one, Jaren did a great job, as did the other quarterbacks when they were on the field."