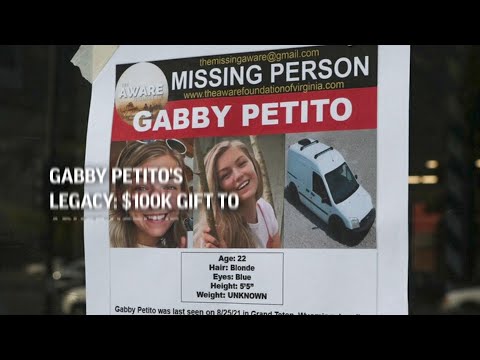 SALT LAKE CITY — Nichole Schmidt, the mother of Gabby Petito, announced a $100,000 donation has been made in her daughter's honor to the National Domestic Violence Hotline.

The donation from the Gabby Petito Foundation would help other victims like her daughter caught in turbulent relationships get help, Schmidt said.

"We're trying to do good for Gabby, and for everybody else," Schmidt said in an NBC News interview. "Our story begins because of domestic violence tragedy, and we don't want to see that happen to anybody else."

"Today" reported that the hotline has been receiving twice as many calls and chats as last summer with wait times of longer than 15 minutes. According to the hotline's CEO Katie Ray-Jones, the donation will help hire more staff to manage the calls which will allow people in abusive and violent relationships to get the help that they need.

"Every potential call that's coming in is someone's life, and that's how we have to think about this. Time is precious, lives are precious," Ray-Jones said.

Petito was killed by her fiancé, Brian Laundrie, last year, while the couple lived out of a van on a cross-country trip, including passing through Utah. Petito was found strangled on the outskirts of Grand Teton National Park in Wyoming. Laundrie's body was later found in Florida after authorities say he died by suicide.

In an interview with the Associated Press, Schmidt said that she receives a lot of messages from people that were influenced by her daughter's story to evaluate their relationships.

"I think Gabby's story touched a lot of people and she's saving lives. I get people messaging me all the time that they were inspired by her to get out of a relationship," Schmidt said.

The donation comes nearly a year after police responded to a 911 call from bystanders about an alleged physical altercation in Moab.

"I want to jump through the screen and rescue my daughter," Schmidt said about the video footage of Petito in Utah. "She is hurting, she is scared."

Deseret News reported that Katie Hood, CEO of One Love, an educational organization that teaches about unhealthy relationships, said domestic incidents can sometimes take an entire police officer's day and that usually they don't end in tragedy.

Hood said police respond to 600 domestic incidents each day. "Most of them do not end with somebody being killed and I think the police are in a tough spot, trying to figure out where to intervene and where to not," Hood said.

Schmidt said she is working through the pain of losing her daughter by helping those in abusive and violent relationships as the one-year mark of Petito's tragic death is approaching.

"She touched the world, right? This whole tragedy that happened is for a higher purpose.," she said. "That's what keeps me going."