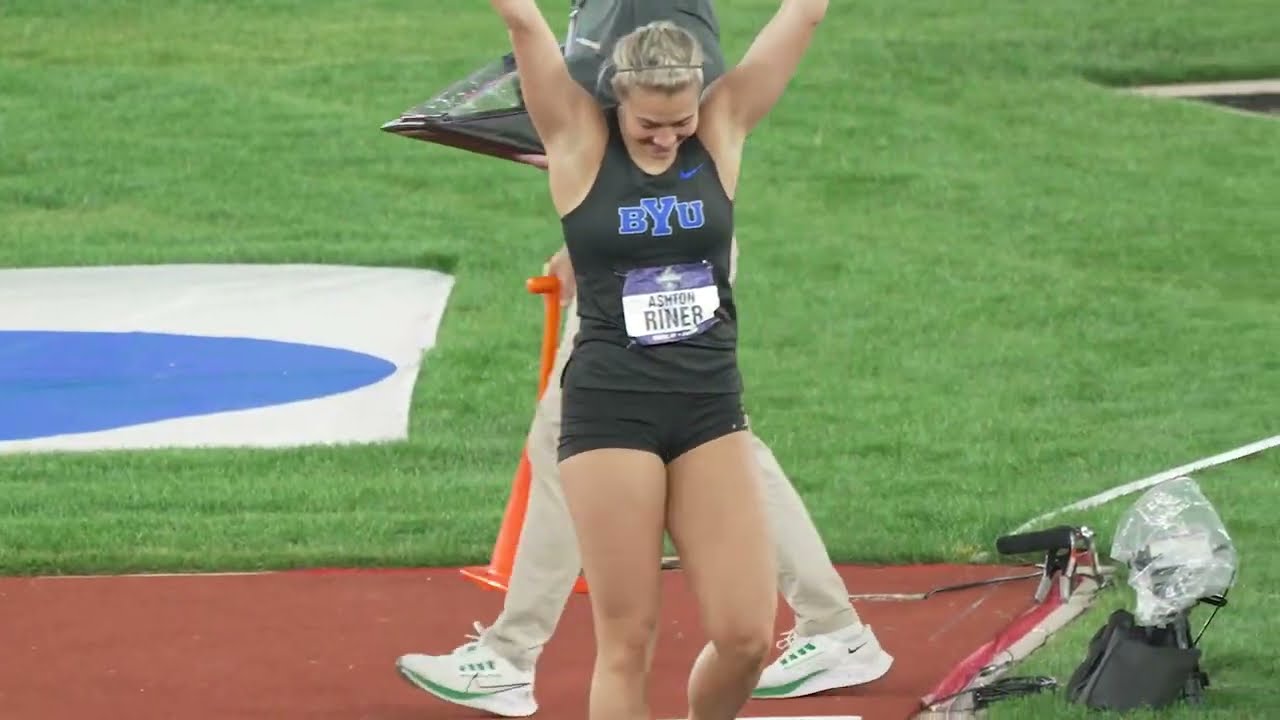 PROVO — Ashton Riner brushed her fingers over her preferred javelin, hefted it in her 5-foot-9 frame, and took one long look down field at the newly renovated Hayward Field.

With one run, a flick of her wrist, and all the power she could muster from her elbow forward, the BYU javelin thrower spun a first-time throw of 191 feet, 1 inch to open the second flight of the NCAA national championships in Eugene, Oregon.

Riner's throw of 58.24 meters (191-1) stood the rest of the evening, and no one else topped it on the way to her first career javelin championship and the first in the program's storied history.

"Ashton demonstrated tonight why she was the No. 1 ranked javelin thrower in the nation," BYU director of track and field Ed Eyestone said. "She took the lead in dominant fashion on her very first throw and was never challenged. I'm so happy for her and coach Arrhenius, who with his three javelin entries has become one of the top javelin coaches in the country."

Four years after debuting with BYU in spectacular fashion, Riner finished the job at Hayward Field to clinch BYU women's first field title since 1992. The junior from Connell, Washington, burst on the scene as a true freshman in 2018, finishing 11th at the NCAA outdoor championships with a throw of 50.25 meters (164-10) to earn second-team All-America honors.

Riner is the first BYU field athlete, men's or women's, to win a national title since her throws coach Niklas Arrhenius did so in 2007.

"I'm super proud of Ashton," said Arrhenius, who was in Eugene to coach Riner's championship run. "I always felt that she had this capacity, so it's amazing that she's been able to have this great, year, stay healthy, and be able to win this championship."

Riner's individual title leads BYU after the first day to a tie for sixth place with 10 points, 8 points behind leader Arizona State. Virginia Tech, Nebraska and Florida have 14 points each in a tie for second, followed by Cal with 12. BYU is tied with Ohio State, Alabama and Louisville in sixth.

Courtney Wayment finished the 3,000-meter steeplechase in 9 minutes, 41.21 seconds, the fourth-best time of the day in Thursday's semifinals. That'll book a spot for the reigning 5,000-meter indoor champion in Saturday's finals, which she'll contest at 3:54 p.m. MDT on ESPN.

Wayment's teammate Lexy Halladay wasn't so lucky, finishing in 10:31.38 for 11th place in her heat and 23rd overall.

BYU's Claire Seymour was pushed out of the 800-meter qualifying in Thursday's semifinals, falling back in the final 110 meters before finishing fifth in her heat in 2:04.91. Last year's fourth-place finisher, Seymour, who is also the reigning NCAA indoor runner-up in the same event, finished 18th overall.

Thursday also wrapped up the second day of competition in the men's decathlon.

Dallin Vorkink opened the second day of the decathlon with a 15.33-second finish in the 110-meter hurdles. He then added a 138-foot, 10-inch throw in the discus — a fifth-place finish that momentarily vaulted him from 20th to eighth with three events remaining.

But Vorkink saved his best for last, pushing through to top Kansas State freshman Emil Uhlin by over a second to win the 1,500-meter run to cap the 10-event specialty and propel him to 11th place overall. The BYU junior posted a final time of a personal-best 4:22.92 en route to second-team All-American status.

Vorkink finished with 7,592 points over the two-day multi-event decathlon, 865 behind champion Ayden Owens-Delerme of Arkansas. Texas' Leo Neugebauer and Georgia's Kyle Garland each finished in the top three.