Utah Inland Port Authority board gets big shake up. What does it mean for its future?

The Utah Inland Port Authority board listens to public comment during a meeting at the state Capitol Wednesday. The members of the board were sworn in during the meeting. (Carter Williams, KSL.com)

SALT LAKE CITY — The Utah Inland Port Authority underwent its biggest leadership adjustment to date Wednesday, as an entirely new group was sworn in as members of its board of directors.

While its existing leaders don't believe the changes will drastically change the direction of the port, they could help bring a fresh set of eyes as the port turns from a concept to a logistics institution for the state.

"I don't think it shifts the focus. The focus, since day one, was to have this smart, sustainable and equitable inland port — at the function of it," said Jack Hedge, the executive director of the Utah Inland Port Authority. "I don't think it's going to change the projects, per se. What it will do though, is give us a better look at what this next phase looks like."

The authority welcomed in six new board members during its meeting Wednesday, replacing its previous 11 members. The change is the result of a new law that went into effect last week that changes the complexity of the board; Salt Lake City relinquished its voting membership in exchange for a 25-year contract and a larger share of future tax increment within the port's 16,000-acre jurisdiction.

Salt Lake City still has some representation with the new board, though. The six new members are:

The new board quickly voted Hansen as the chairman of the board and Hemmert as its vice chairman moments after all six were sworn in. They spent most of the meeting receiving legal instructions, sharing their views of the port, and hearing from the public before adjourning.

A fresh set of eyes

Hedge welcomes the board change as the inland port moves from its ground stage to expansion. The board approved a $150 million bond last year that went to forming a public infrastructure district, which sets up the infrastructure needed to turn the port into the item it was envisioned to be. The Utah Legislature also approved money for projects that will enhance its potential.

"Now that we're ready to really start moving, start putting some stakes in the ground, if you will, having a different set of eyes, ears and experiences can be a real benefit for us," he told KSL.com after the meeting. "I'm super excited about it because now is the implementation phase." 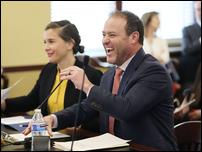 Utah's anti-inland port activists aren't happy with it, but Salt Lake City leaders are — for the most part.

Schultz, who sponsored the bill that adjusted the board, said that since it's difficult to "grow roads," there's going to be a bigger emphasis on the existing roads and railways in the state, which is why he believes the port matters. The point of the port also became relevant again in recent years, as COVID-19 pandemic disruptions resulted in drastic shifts in the global supply chain. Those shifts have been so large that businesses and governments are still trying to sort it all out.

While most Utahns think of how it impacts consumption, port officials say it will ultimately help the businesses throughout the Intermountain West trying to send supplies out into the global market.

"Today, that has been decimated by the supply chain crisis that we're in," Hedge said. "We talk about the congestion we're in at the ports ... but the other side of that coin is the soybeans from the Midwest, potash from southern Utah and lumber from Colorado can't get into a box back out to market, so we're starting to lose markets that U.S. products have had ... for years."

If that continues, American business is in for a world of hurt as it would extend the U.S. trade gap, he contends. He believes the inland port will ultimately be "critically important" to reversing the supply chain bottleneck and keeping it afloat in the future.

One thing that didn't change Wednesday is the pushback from groups that still oppose the port, who argue that there are many unanswered questions about the port's impact on the environment and on the communities by the port. One by one, they spoke out about the issues they still have about poor air quality and, especially now, water availability, as well as other impacts the port creates.

They also questioned the economic importance of the port.

"How is the Utah Inland Port Authority adding value above and beyond what would normally be generated by the private sector in conjunction with existing municipal authorities?" asked Deeda Seed, with the group Stop the Polluting Port Coalition. "In Utah, we pride ourselves on industriousness and (the) western spirit of self-reliance. And yet, unfortunately, right now, the port authority is looking like welfare capitalism based on giving away taxpayer money to special interest."

We cannot, for a moment, take our eye off the ball, or this thing will go off the literal and metaphorical rails very quickly.

Petro-Eschler, whose council district includes the inland port's land, said she understands the celebration and frustration. She does believe Rose Park will benefit from the economic prosperity, arguing the neighborhood is already the "engine that keeps the state running" because of its blue-collar workers. However, it's also at the center of the impacts from the port.

"This project is probably the biggest double-edged sword that will ever come to my community in our generation," she said. "We are the workforce that has built the economic success we've had and we are the most vulnerable if we don't continue to select things that operate in the best interest for us in the future. ... We cannot, for a moment, take our eye off the ball, or this thing will go off the literal and metaphorical rails very quickly."

Hedge said he believes everyone on the board has a willingness to find solutions that improve business in the state while also reducing environmental impacts. The state's agreement with Salt Lake City also put together a clearer roadmap for the port even as it shook up the board.

He said it adds more thought to the environmental component of the port with every project, including ways to alleviate traffic congestion, noise and air pollution, stormwater runoff, water treatment and the critical bird habitat closer to the shore of the Great Salt Lake.

However, its critics aren't as optimistic. Seed says there's still a "lack of information" about the proposed projects. And given the state's worsening drought, there are ongoing questions about how it will have the water it needs to keep running.

"The port will only exacerbate an already serious water shortage on the Wasatch Front, dry up the Great Salt Lake further, and add more dust to our already serious pollution problems," she wrote in an email ahead of Wednesday's meeting. "Water is what Utah needs more than anything else, not new low-wage warehouse jobs."