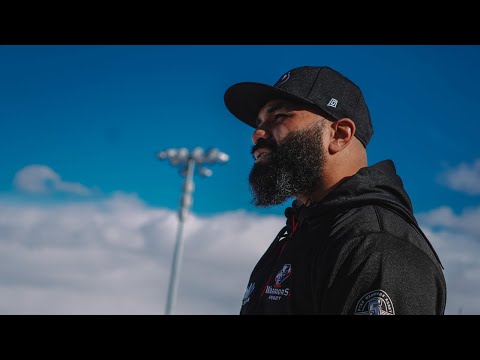 The former BYU and NFL fullback and rugby standout from New Zealand is returning to the Wasatch Front to re-join Utah's professional rugby outfit, the Utah Warriors announced Tuesday. Lasike will join the Warriors in late March, following the conclusion of the Six Nations Tournament, which wraps up March 19.

It's been "awesome," Lasike told KSL.com, to play for one of England's most historic clubs. But as a new chapter turned on the 31-year-old former BYU rugby national champion's life, he also saw a time to move on — and couldn't think of a better place than returning to the Major League Rugby club where his professional career began.

"Utah has a soft place in my heart," Lasike said. "I spent a good time in my life, from the end of my high school years, college career, and I still have a lot of family and friends. I'm excited to get back and do some good out there."

Lasike returns to Utah where he spent the 2018 season with the MLR side before departing for Harlequins in the English Premiership.

The 31-year-old center played 29 games with four tries for the Quins, signing an extension to stay with the 2021 Premiership champions ahead of the 2020. But injuries took a toll on the bruising center — he suffered an Achilles' injury last summer that took him out of several Rugby World Cup qualifiers, and he most recently spent time on loan with London Scottish.

"Physically, I'm 100% right now," said Lasike, a fan favorite who credits the past two weeks in the Championship with accelerating his rugby rehab. "It had been a long, long rehabbing time on my Achilles, but it was awesome to get some game time in. I asked the Quins to get some game time in the Championship — and it was awesome to get out there and open up my lungs.

"Getting those minutes was crucial to me getting back. I feel really good."

In Utah, Lasike returns to the club where he made seven appearances during the Warriors' inaugural season. The New Zealand native came to BYU to play rugby but quickly found himself on the football team — the 5-foot-11, 232-pound fullback ran for 843 yards and 10 touchdowns in three seasons on the gridiron — before a brief NFL career that saw time with the Arizona Cardinals and Chicago Bears.

He also has a handful of appearances with the U.S. national team, where he made his debut at the Americas Rugby Championship in 2018. The New Zealand native moved to the United States at 17, when he helped the prestigious Highland rugby club to a national championship.

Returning home will be great. But part of Lasike's heart stays behind in Twickenham, United Kingdom, where he says "everyone is an attacking player" and the sport of rugby is a national pastime.

"My daughter spent most of her life her, and our family really enjoyed it," Lasike said. "It's been awesome just learning ... I took a stint off in my early 20s, playing American football, and started my professional career at 28. I was kind of late to the rugby scene. I was able to grow in the game with some world-class players at the Quins — such a prestigious club. It's a well-known, famous name in the rugby community. I've thoroughly enjoyed it."

The first played capped in Utah pro rugby history, Lasike's presence with the Warriors in 2018 helped establish a foothold for a nascent league and a team finding its way in the Utah landscape. He returns to a Warriors club that rejuvenated its form on the pitch, most recently advanced to the Major League Rugby championship series before falling in the league semifinals to the LA Giltinis — a club that didn't exist when Lasike left for Harlequins.

"From the first time I saw Paul play rugby in high school, you could tell he was different," said Warriors co-founder and CEO Kimball Kjar, who also previously coached at BYU. "As a player he's one of top talents I've seen come out of the state of Utah and having him return to the Warriors will give the team not only an unbelievable talent, but we'll also add a great person this community will be able to rally around."

Off the pitch, Lasike and his wife Ani recently announced the forthcoming arrival of twin boys. The twins, who will join an older brother and sister, are due in late April.

Perhaps that affected Lasike's move as much as anything. He already brought his wife and two older children, around 7 and 8 years old, back to Utah a month ago. And now he'll be joining them when he finalizes his contract with Harlequins and finishes the move himself.

"We're pretty terrified right now," Lasike admitted at the prospect of twins, tongue firmly in cheek. "Our older kids are going to be almost 7 or 8, so we've had a decent break, and it's always been on the table. It was just one of those things that we put in the Lord's hands, and he blessed us with two. We were in shock initially.

"But we're excited, as well; it was a pretty massive deal for us."

The Warriors, who opened the season with three-straight road losses, will play their first home game of the 2022 season Saturday, March 5 against the expansion Dallas Jackals. Kickoff is scheduled for 12 p.m. MST at Zions Bank Stadium in Herriman.