Appearing on MSNBC's "Morning Joe" on Wednesday, Schumer, D-N.Y, said it's "unbelievably amazing" that Romney, a Republican, would equate Trump and Biden.

In a speech on the Senate floor shortly after watching Biden throw his support behind the Democratic effort to eliminate the Senate filibuster to advance voting rights legislation, Romney responded to comments the president made that he found "troubling."

Romney, who opposes getting rid of the Senate's 60-vote rule to pass most legislation, noted that Biden said in his speech that the goal of some Republicans is to "turn the will of the voters into a mere suggestion."

"And so President Biden goes down the same tragic road taken by President Trump, casting doubt on the reliability of American elections. This is a sad, sad day. I expected more of President Biden who came into office with a stated goal of bringing the country together," Romney said.

Schumer said it was Trump who created the big lie about the 2020 election.

"Donald Trump … is importuning people to even threatening violence. And, by the way, the violence wasn't just on Jan. 6. Elections officials across the country are being threatened, nonpartisan election officials who just count the vote," he said.

Republican-led state legislatures across the country are passing laws to make it more difficult for people to vote, Schumer said. 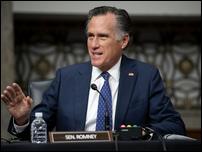 Utah's two Republican senators condemned Democrats' effort to eliminate the Senate filibuster as President Joe Biden said Tuesday there is "no option" but to eliminate the rule to pave the way for sweeping voting rights legislation.

"I am disappointed, deeply disappointed in Mitt Romney being that partisan when the facts, not the issues, the facts, not the ideology, are the other way," he said. "It's all Republicans in legislatures, without a single Democrat, in a highly partisan move, taking away the voting rights of people of color, of young people, of older people, of people who live in urban areas. It's a decimation of our democracy."

In his speech, Romney said that despite a number of "good people in my party," most Republicans believe Trump's lie that the 2020 election was fraudulent and stolen. Romney has urged GOP leaders to tell voters the truth about the election — that Biden won.

"Can you imagine the anger that would be ignited if they see Democrats alone rewrite, with no Republican involvement whatsoever, the voting laws of the country? If you want to see division and anger, the Democrats are heading down the right road," he said.

Among Romney's arguments against removing the filibuster is the prospect of Trump winning the presidency in 2024 and Republicans controlling the House and Senate.

"Have Democrats thought what it would mean for them — for the Democrat minority — to have no power whatsoever?" he said.

Schumer said he doesn't see Romney or any Republican doing anything to strengthen voting rights in the country.

"Mitt Romney is saying up there look what would happen if Donald Trump were president," he said, "but where's his voice creating fair elections so it only happens because he wins the votes not because he steals the election, which he tried to do this time."