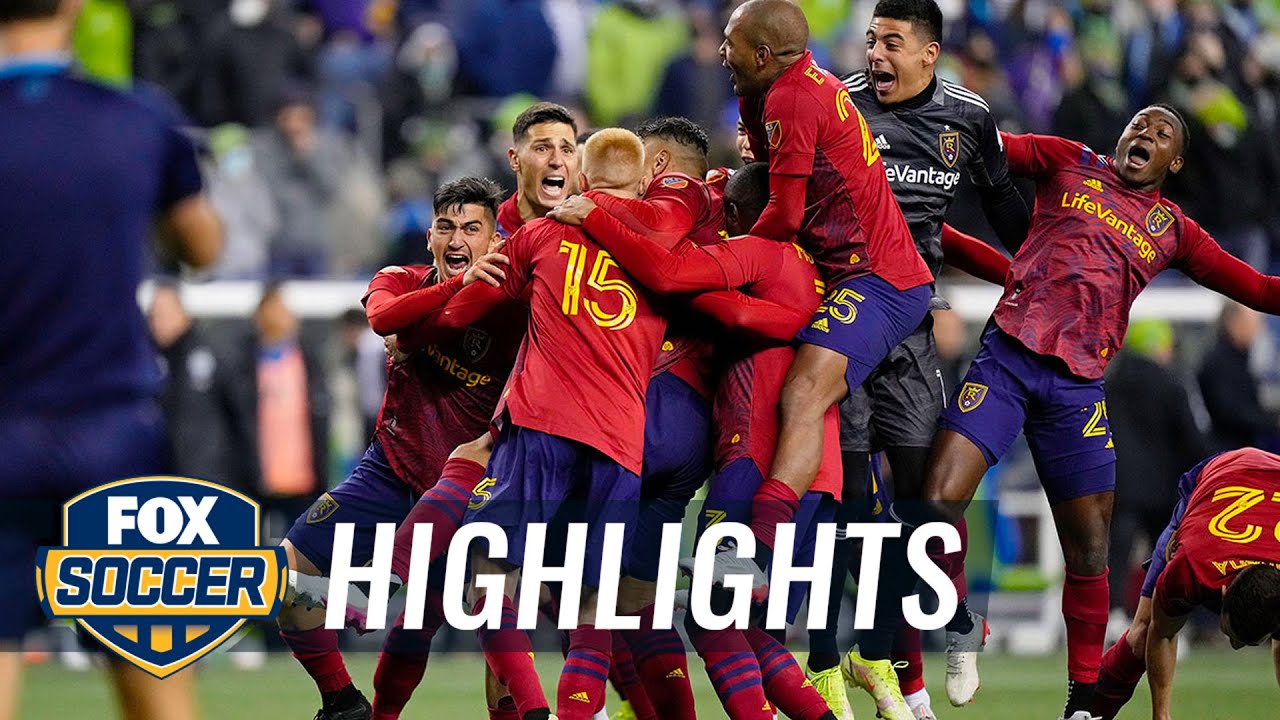 After 21 shots faced and more than 120 minutes of soccer, RSL failed to register a single shot in the opening round of the MLS Cup Playoffs on the road at Lumen Field — and had the Sounders right where they wanted them.

In a scene eerily reminiscent of the 2009 MLS Cup final — but with the host Sounders playing the role of the LA Galaxy — RSL goalkeeper David Ochoa made two saves and stopped a penalty to eliminate Seattle from the playoffs 6-5 on penalties Tuesday night.

Justen Glad converted from the spot for RSL, the sixth of the shootout on a night when the visitors barely mustered an offensive threat in regulation and two 15-minute extra-time sessions.

"It's definitely not easy. But I would tell you I'm a confident guy," Ochoa said after collapsing into a chair near the locker room following the match. "I dreamt of this since I was a little kid, and I'm not going to let anyone get in my way from stopping my dreams.

"I'm not saying this is an easy career that I'm pursuing; it's definitely tough, and I'm learning every day. But that's my mentality. … I want to do this, and I'm going to give my all."

Seattle had nearly two dozen shots, three shots on goal and 62% of possession, but remained scoreless through 120 minutes of play, including 30 minutes of extra time.

RSL had less: zero shots, no shots on goal, no shots blocked, and a meager 38% of possession. Ochoa made two saves and practiced the "Dark Arts" as if it were a World Cup qualifier in CONCACAF to preserve a chance at advancing to face Sporting Kansas City in the Western Conference semifinals.

But at the end of the night — or early morning, for any television viewers on the east coast — it was Salt Lake emerging as the only road team to advance to the conference semifinals.

And with one swift kick from Glad's right boot, the Sounders were headed home in the first round of the playoffs for the first time in franchise history. Fitting, as it was Glad who marshaled that back line into 10 blocked shots, saving a goal without a touch from Ochoa.

"I think that says a lot about their mentality, what they're willing to do for their teammate and the group, and what the objective is," RSL interim manager Pablo Mastroeni said. "We've had some difficult results down the stretch and most of them coming with conceding three goals.

"The guys in the back have become more vocal, demanding more from the guys in front of them, and tonight was a great reflection of that. Everyone was doing whatever it takes for the team."

In a match played without team captain Albert Rusnak, who announced about an hour before kickoff that he would not be available after testing positive for COVID-19, the RSL offense sputtered for 90 minutes. Led by former RSL head coach Freddy Juarez under Seattle manager Brian Schmetzer, the Sounders outshot Salt Lake 15-0 through regulation, but Ochoa and a back line led by Glad held Seattle to just two shots on goal.

Rusnak is fully vaccinated, RSL officials confirmed, but Mastroeni doesn't know when he'll be able to rejoin the team. The visitors had to find a way to win without him Tuesday night; and if they couldn't do that, Salt Lake figured out a way to send Seattle home earlier than ever before in a playoff season.

For the Sounders, it was the epitome of brutality. For RSL, it was the "perfect example of what mentality looks like," Mastroeni said.

"The onus is on the home team to put on a show," Mastroeni added. "The onus was on us to find a way to win."

Ochoa didn't make a save until the 47th minute, a routine stop against Nicolas Benezet. Moments later, Morris dispossessed Joni Menendez and took the ball the other direction before aiming a shot over the crossbar.

Even as Seattle pressed for the go-ahead goal, the Sounders couldn't find it — no matter how close the Sounders came, including through Ruidiaz's tagging of the right post in the 73rd minute.

What the visitors lacked in offense, they made up for in frustration and defending, holding Seattle to just two shots on target in regulation.

And thanks to one magical save in a shootout in Seattle, and one final kick from a homegrown player that went through the RSL Academy when it was located in Casa Grande, Arizona, Real Salt Lake will move on to face rival Sporting Kansas City — where Damir Kreilach lifted RSL into the playoffs in the final minute of the regular season — in a Western Conference semifinal Sunday, Nov. 28 (1 p.m. MT, ABC).

"The most important thing for this group at the moment is rest," Mastroeni said. "We'll game plan for that game, but we just played them. We understand what they are trying to do, and now we've just got to find a way to get after it — and come away with a result in another difficult place to play. It doesn't get easier; it gets harder."