TUCSON, Ariz. – Utah's march toward the Pac-12 championship sputtered far more often than expected, but the trip to this desert oasis produced the desired outcome.

Continuing their late-season success against the conference, the Utes ultimately put away the one-win South division cellar dwellers on a sun-splashed fall Saturday afternoon. The 38-29 win over Arizona sets up next week's showdown against Oregon, ranked third in the College Football Playoff poll, at Rice-Eccles Stadium.

A 24-point favorite, the Utes were supposed to crush the hapless Wildcats. Instead, they slogged through a somewhat uninspiring performance for nearly three quarters before finally sending Arizona to its 21st defeat in the last 22 games.

"That's what you call winning ugly," said Utah coach Kyle Whittingham, whose 141 wins is tied for the most in program history. "You've got to do that once in a while."

The bigger story here is the divergent paths of these two programs. One of them is an absolute mess, to the point it was worth celebrating merely to give a quality team a competitive game.

Ugly as this one was — think Wicked Witch of the West on a bad hair day — Utah still hasn't lost to Arizona since 2015. Truth is, these programs have been going in opposite directions for more like two decades.

Blame it on Arizona's ridiculous amount of instability in coaching, the exact opposite of Utah. In the time Whittingham has served as the head coach, beginning in 2004, five different head coaches have shuffled through the Arizona program (counting two interim coaches who took over at midseason).

Until the administration gets it right, Arizona football will be viewed as nothing more to pass time until basketball season. Using Utah as a gauge, it should not be this difficult to find a coach capable of producing seasons of at least six wins along with the occasional big year.

Far from a traditional football powerhouse, the program owns only two outright conference championships (1935-36 in the Border Conference), the Wildcats began a run of respectability with seven winning seasons in eight years beginning in 1988.

But he's where it went haywire.

Tomey, a close friend of former Utah coach Ron McBride, fell victim to his own success. Highlighted by the "Desert Swarm" defense that was a major factor for the 12-1 record in 1998, his teams produced five NFL first-round draft choices, 20 All-Americans and 43 first-team all-Pac-10 players.

Tomey, who died at age 80 in Tucson two years ago, owns two of the three 10-win seasons. But the intense scrutiny he faced during two losing seasons in his last two years was enough.

"The public debate became so difficult for my family, for our team (and) for our coaches and their families," Tomey said after his team finished 5-6 in 2000.

The program has been mostly a disaster since Tomey was run out. Only one of the next seven coaches, Rich Rodriguez, was over .500.

Rodriguez, who did guide Arizona to one appearance in the Pac-12 championship game, was an explosion waiting to happen on the sidelines during games. He was fired on Jan. 2, 2018, after a three-month internal investigation into allegations of sexual harassment and creating a hostile work environment.

He admitted having an extramarital affair but denied other sexual misconduct allegations. A lawsuit filed by his former administrative assistant was dismissed in 2019.

Setting the bar for ineptitude as a coach, Kevin Sumlin plunged Arizona football to unimaginable depths. Mercifully, the standoffish Sumlin was fired last season on the heels of a 12-game losing streak that included a 70-7 shellacking to Arizona State in his last game.

Utah fans might want to be grateful for what they have in Whittingham, the boring family man who has brought no shame to his university. All Whittingham does is field competitive teams year after year.

"I would say they are the model in the Pac-12 for us, for what we would like to look like," first-year Arizona coach Jedd Fisch said going into the game.

In this case, the numbers don't lie. The Utes have won at least nine games in five of the last six full seasons, an amount Arizona has done only four times since joining the Pac-10 in 1978.

"If you have stability in the coaching staff and continuity, it certainly helps your chances," Whittingham said. 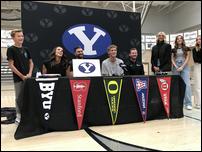 Even before Dave Rose decided to retire after 14 years as the BYU basketball coach, athletic administrators already had identified the leading candidate to succeed him.
×