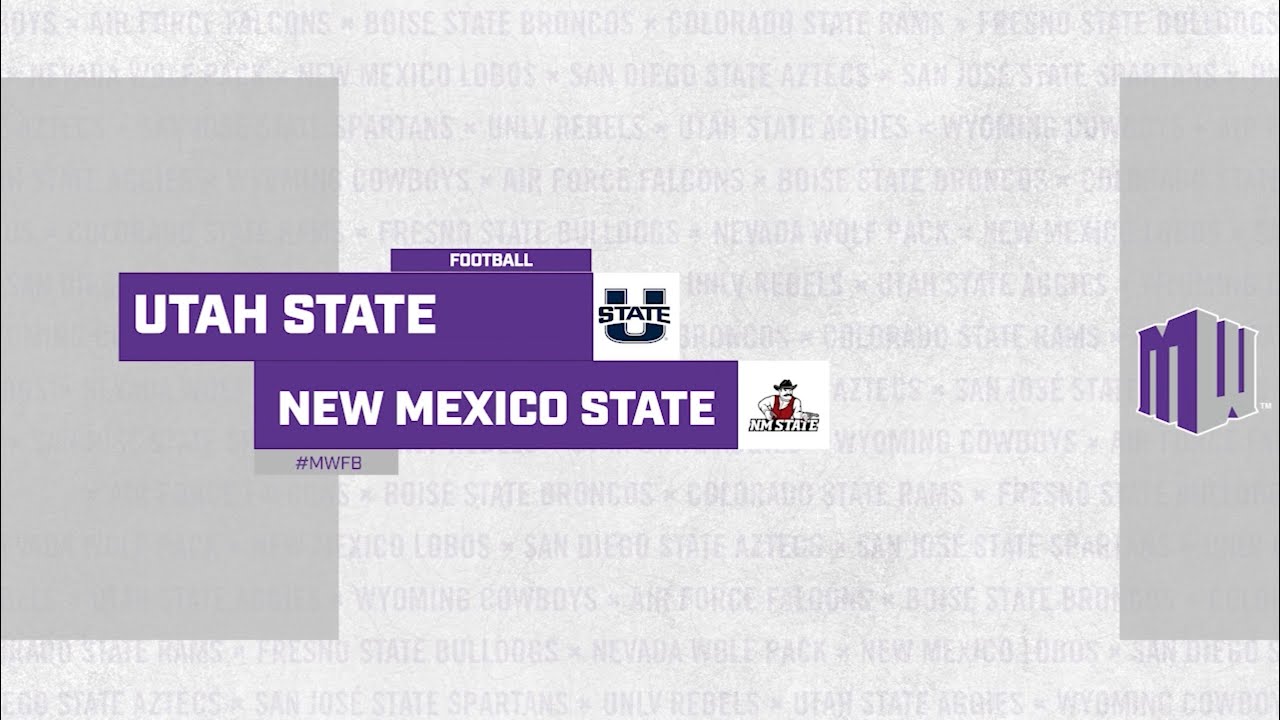 The visiting Aggies got outplayed in the first half on both sides of the ball and were outgained in total yardage 237 to 104, and entered halftime trailing 13-7.

Led by star receiver Deven Thompkins, who hauled in two touchdowns and a career-high 215 yards on nine receptions, the Utah State offense exploded for 351 yards and scored four unanswered second-half touchdowns to coast to a 35-13 victory to improve to 7-2 on the season.

Logan Bonner was 23-of-33 passing for 359 yards with four passing touchdowns, and the Utah State defensive front feasted on the New Mexico State offensive line, racking up 14 tackles for loss and seven sacks.

"Proud of the win, not proud of how it looked," Anderson said. "We played very uninspired football in the first half ... but very proud of the way our guys responded."

In terms of the chase for a Mountain West title, the win was inconsequential. But for the record books, it was quite beneficial, giving Thompkins a chance to add to his historic season. First, his efforts helped him jump Western Kentucky's Jerreth Sterns as the NCAA reception leader this season, with 1,314 yards through nine games.

Second, it's the first time Thompkins has reeled in 200-plus receiving yards in his career. and lastly, he now sits ninth all-time in single-season receiving yards at Utah State and is closing in on Kevin Curtis' record of 1,531 yards set in 2001.

"You know, I'm lost for words. It's something I've been wanting and been getting close to every single weekend," Thompkins said. "100-yard games, 177-yard games are cool and all but I've just been waiting for this 200-yard game. Honestly, in a way it's a relief, but it makes me even more hungry, being tied for ninth in school history. It's cool. But I really want to be the No. 1 in school history. So that's what I'm after right now."

Of those yards, 54 came on a big play out of halftime that set the tone for the remainder of the game. On second-and-10 from the Utah State 46-yard line, Bonner connected with a wide-open Thompkins for a touchdown that, following the PAT, gave the visiting Aggies a 14-13 lead.

After Byron Vaughns sacked New Mexico State quarterback Jonah Johnson on third down, the home Aggies punted it back to Utah State. On second-and-10 from their own 34-yard line, Bonner launched it up to Thompkins, who, going for the 50-50 ball, launched impressively high up in the air and snagged it for a 22-yard gain. He called it his favorite catch of the day.

The catch put Utah State in New Mexico State territory, and moments later, Bonner connected with Derek Wright for a 4-yard reception to give the Aggies a 21-13 lead.

After another defensive stop, where Johnson was terrorized by the Utah State front, the visiting Aggies manufactured a 10 play, 64-yard drive capped off by a 4-yard touchdown run from Elelyon Noa to make it 28-13.

New Mexico State tired to punch back, but a fourth-and-goal pass deflection from cornerback Zahodri Jackson ended their drive. With the ball back, Bonner immediately connected with Thompkins for a 51-yard gain and then found Justin Mcgriff for a 1-yard touchdown to go up 35-13 with 8:43 left to play.

"We just went really, really simple," Anderson said of the second-half performance. "We stayed away from bells and whistles and just lined up and played kind of day one, day two, day three, install football, and you know, got playmakers in space and protected a little bit better."

"Coach Anderson came in there and he refired us back up," Thompkins said. "The energy coming out of the tunnel to begin the game was a little weird, ya know we're used to having so many fans, we're used to having a lot of energy in the stadium and not having that made us come out a little flat. But definitely you know a lot of leaders stepped up, I started encouraging my teammates like 'let's go finish this, let's go play ball like we know how to play ball.'"

An inspiring halftime was necessary because, in the first half, Utah State looked anything but.

New Mexico State was able to get down the field with ease on their first two possessions. The opening drive, though, they came up empty, with linebacker Justin Rice blocking a field goal attempt. The home Aggies' second drive was capped off with an 11-yard touchdown run from running back Juwan Price.

Utah State found success getting pressure — forcing four first-half sacks — but were exploited by the passing attack. Johnson was mobile with his legs, evading pressure and finding open receivers. He finished the half 20-of-27 passing for 174 yards.

Utah State's offense showed an atypical version of itself as well. Despite having starting running back Calvin Tyler Jr. back after he broke his hand in the UNLV game, they struggled to establish the ground game, running for 33 yards on 11 attempts. The air attack wasn't much better, with Bonner passing 8-of-13 for 73 yards and an interception.

After going three-and-out on their first two drives, the Aggies got into the red zone early in the second quarter. But Tyler Jr. was stuffed on a fourth-and-inches on the 7-yard line.

Utah State's defense responded with a three-and-out at the goal line, and the offense got the ball back at the New Mexico State 27-yard line. Moments later, Bonner connected with Thompkins, who reeled in the line drive at the back of the end zone for a 22-yard touchdown, narrowing the score to 10-7.

New Mexico State answered with a second of two field goals from Ethan Albertson to give the home Aggies the 13-7 lead into halftime. But then, it was all Utah State.

The Aggies of Logan improve to 4-0 on the road this season. They'll try to make it 5-0 next week when they return to conference action to take on San José State.