Utah Jazz guard Jordan Clarkson (00) goes to the hoop during the game against the Denver Nuggets at Vivint Arena in Salt Lake City on Tuesday, Oct. 26, 2021. (Spenser Heaps, Deseret News) 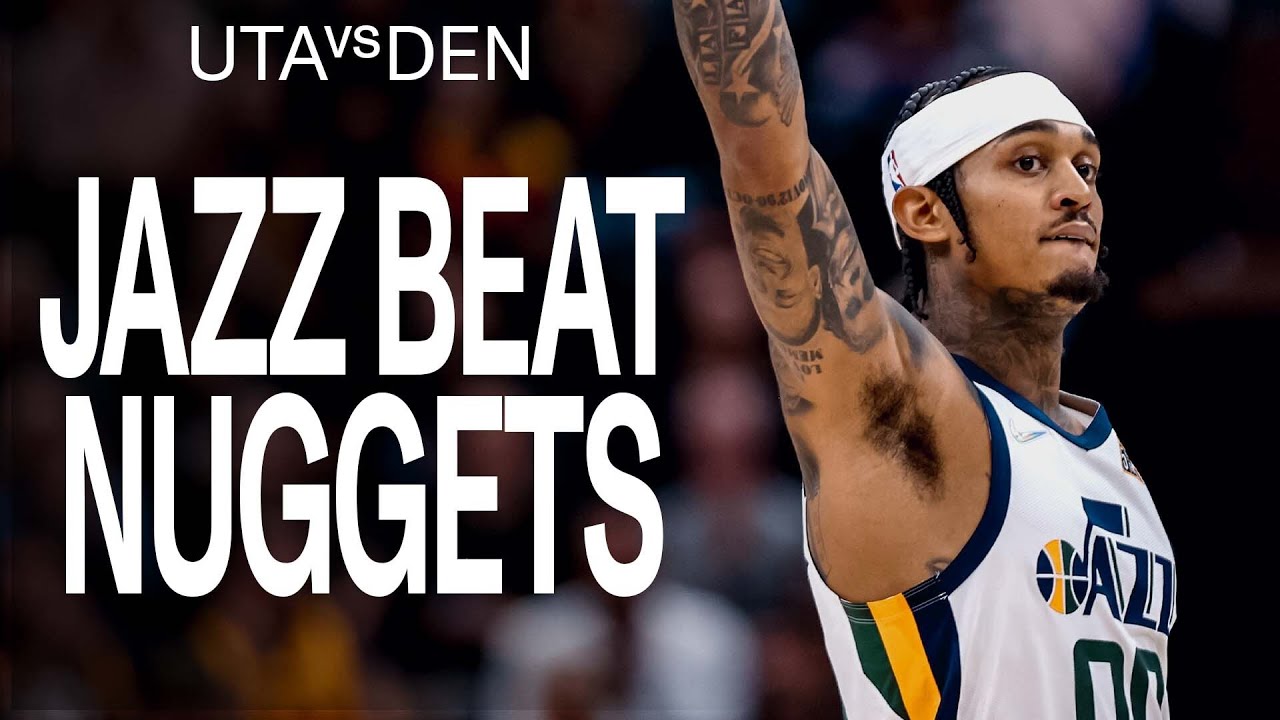 Gobert had made a move to the basket and he and Jokic's knees connected. The reigning MVP immediately fell and grabbed at his right knee in obvious discomfort. A few moments passed before Jokic slowly limped his way back to the Denver locker room where he was diagnosed with a contusion; his night was done.

Suddenly, a matchup between two of the best centers in the game became a familiar battle: Gobert vs. the narrative that he can't defend small lineups.

The victor? Gobert, at least on this night (and, to be honest, most nights).

The Jazz outscored the Nuggets by 11 in the fourth quarter to roll to a 122-110 victory Tuesday at Vivint Arena and improve to 3-0 on the young season.

The air went out of the building as Jokic grimaced in pain on the floor late in the second quarter. Up to that point, the teams had treated a nationally televised audience to an offensive showcase. Jokic had 24 points, six rebounds and six assists in less than a half. The Jazz, meanwhile, were driving at will, going 19 of 25 from inside the arc.

The shot making was superb and defense was optional.

Jokic's injury changed everything, but maybe not in the way that was initially expected. Denver shot 20 of 27 with Jokic on the floor, and 4 of 16 when he was not. So when Jokic missed the rest of the game it should have been an easy Jazz win, right?

"Oftentimes a team lifts their level," Quin Snyder said of injuries to stars. "He's obviously the central part of the game plan, so that changes."

With no Jokic in the second half (he was kept out as more of a precaution, the team said), the Nuggets went small — and, well, the Jazz, like they have so many times before, struggled.

Donovan Mitchell had four turnovers in the third quarter, and Utah passed up open shots that led to bad possessions and oftentimes easy buckets for Denver on the other end. That allowed a severely shorthanded Nuggets team to keep pace.

"I think we have to understand that it's about us; it's not about who we play," Gobert said. "We are smart enough as a team to understand all the different lineups that will come at us. We knew that if Jokic was out, they were gonna play small and try to space the floor. So we just try to punish them inside and move the ball and attack the rim and defensively all lock in, guard our man, communicate, and make sure we rebound."

In that statement, Gobert gave the formula for beating a small-ball team.

On offense: Move the ball, attack the rim and take open shots. On defense: Rebound, keep your man in front and communicate.

It's not that the Jazz didn't know what to do or lacked the ability to do it, they just didn't do it at a consistent level — at least not in the third quarter.

"You'd think I'd learn after the first four turnovers," joked Mitchell, who finished with 22 points and six assists.

To be fair to Mitchell, that is about when he learned; the reads got quicker, the offense got cleaner. What was the reason for that? According to Snyder, the Jazz focused on defense.

"I saw the ball sticking, we passed up shots and, I know we didn't shoot well, but when we don't take our shots and we don't move the ball, things get stagnant," the Jazz coach said. "That affects us on the other end. If we think about our defense, odds are, the ball's going to move and we are going to be more efficient on offense."

"It's kind of the cycle when we play well defensively: We share the ball, then our defense gets better," Gobert said. "I like when that happens; that's when we play our best basketball."

In the last six minutes, against a small-ball lineup, the Jazz played their best basketball and turned a closely-contested contest into a comfortable win.

The Jazz even forced the Nuggets to go to a "hack-a-Rudy" strategy down the stretch to claw back in the game, but Gobert went 8 of 10 from the free-throw line in the final quarter.

"I was mad at myself for missing four free throws in the first half, so it gave me a great opportunity to redeem myself," Gobert said.