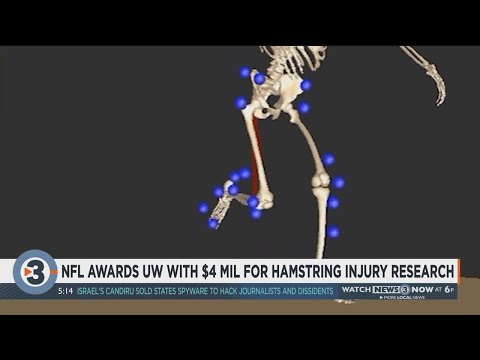 PROVO — Brigham Young University was one of four schools to partner with the NFL on a $4 million study that could play a significant role on the NFL draft, specifically the treatment of hamstring injuries in both college and the professional league moving forward.

Researchers from BYU, along with the University of Wisconsin-Madison, the University of Michigan and the University of Virginia, have partnered on a first-of-its-kind NFL-funded study on hamstring injuries that will seek to determine common signs of recurring impacts of the most common injury suffered by NFL players, one that has seen nearly 75% of players missing time with their teams.

"We're looking for characteristics that we can assess ahead of time that would tip us off to people who are at a higher risk (of hamstring injuries)," said Brett Mortensen, the coordinator of physical therapy and rehabilitation for BYU Athletics, who will help monitor the study on the Provo-based campus. "If we can identify those things, we can adjust training and other things to decrease the likelihood of injury in those players."

The key is to find out "what a healed hamstring looks like," Mortensen added, with researchers from all four schools analyzing data from 500-plus athletes across the country for more than three years to compile roughly 1,500 athletic years of data. They'll digitize the injury, the rehab the athlete undergoes in their program, and look at biological parameters to understand if they can improve the speed of healing, overall healing method, and decrease the likelihood of repeat injuries.

"Hamstrings are the top soft-tissue injury in the NFL," Mortensen said, "and it's an injury that once you have it, it seems to repeat itself."

BYU's team of researchers consists of exercise science professors Wayne Johnson, Sarah Ridge and Dustin Bruening, and will start collecting baseline MRI data from the school's football team during the summer of 2022.

"It's going to be a lot of data and it will give us ample opportunities for mentoring BYU students to set them up for future research prospects," Johnson said in a news release.

Wisconsin professor of orthopedics and rehabilitation Dr. Bryan Heiderscheit is leading the students, in partnership with the NFL, which brought in BYU, Virginia and Michigan to provide comprehensive data from across the country. BYU is the only school among the four that does not have an on-campus medical school, but other facilities on campus made up for the omission.

Findings of the study will also be used for high-impact sprinting sports like soccer, baseball and track and field.

"This will be the largest hamstring study ever conducted in the world," Heiderscheit told News 3 Now in Wisconsin.

Mortensen pointed to the school's MRI research facility, a 3,500-square foot, state-of-the-art facility that conducts research using a Siemens TIM-Trio 3.0T magnetic resonance imaging (MRI) machine used in fields like exercise and health science to psychology and even engineering. The facility is located in the McDonald Building on campus, a short walk from the school's engineering and life sciences buildings.

The machine, along with a dedicated staff from Intermountain Healthcare that regularly partners with BYU in both research and practice, gives BYU powerful tools toward finding answers about the NFL's biggest sports medicine enigma, Mortensen said.

"It's kind of a new thing for athletics to be jumping into the middle of research, but we're looking forward to it and seeing it as something we can fully utilize," he said. "The access (to the MRI facility) is good, and we get a lot of opportunities for training, as well as good control over what we can do there. The university fully supports it and has encouraged the research — especially with us being able to do it right ton campus."

Data from the study could be used in both college and professional football for the treatment of hamstring injuries, including in the medical evaluation of potential NFL draft picks who have struggled with hamstring injuries before, or more be predisposed to them genetically, according to the studies' findings.

"It's a big opportunity for (the NFL)," Mortensen said. "When someone comes for a visit, they may run them through this algorithm if they know they have a history of hamstring injury. That could make them cautious, or they can see if it's an isolated injury.

Dr. Allen Sills, the chief medical officer for the NFL, told NFL.com that finding answers for some of the league's most pressing health and injury concerns is a priority for the multi-billion dollar venture. The league has also partnered with several institutions and universities on a $100 million commitment to concussion research since 2016, among other studies.

"At the league, we recognize the significant burden hamstring injuries have on our elite athletes year after year, and have dedicated resources to analyzing the occurrence and type of lower extremity injuries to better identify ways we can further reduce them," Sills said. "We're hopeful that through the data-based approach outlined by Dr. Heiderscheit and his team, this funding will enable them to develop scientifically-based strategies that will advance the health and safety of our players for years to come."