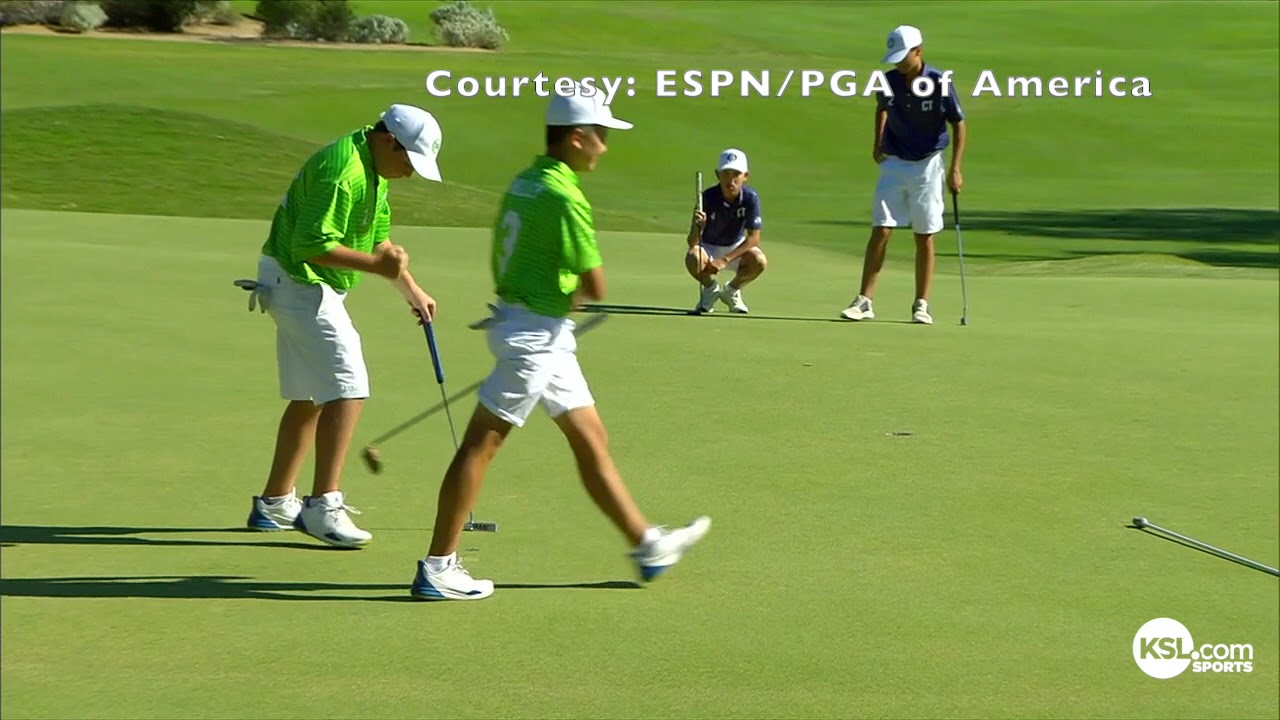 ON THE LINKS — Sitting in his living room on a Saturday afternoon, PGA Tour star Tony Finau was cheering as loud as he ever has while chasing a back-nine rally at a major.

But this wasn't Finau making a charge at The Masters or a U.S. Open or even a Ryder Cup title.

This one was for his family.

"My man Jordan balled out to help Utah win!" Finau wrote on Twitter while he posted live on his Instagram Stories. "I'm proud of him."

Finau cheered from his couch via the ESPN2 broadcast much the same way his own family and friends cheered as he put together his best finish on the PGA Tour of his career, riding with the highs and lows of the championship match. The preteens on the squad, though? They never doubted.

"We felt really strongly," said Tele Wightman, the former BYU assistant coach who captained the team. "They believed in each other, and they really just kept believing."

"I've never played in anything like this," he added. "It's really fun."

Ofahengaue, who refers to his second cousin as "Uncle Tony" because he and his older cousin spend so much time together on the course, drained a birdie putt on the 14th hole that helped Team Utah to beat Connecticut with four points in the 6.5-point final match.

The 10-year-old golfer from Lehi with BYU blood lines then stuck his approach shot from just off the bunker on the par-5 18th hole, and Team Utah took the hole to go 1 up in their match en route to the team win.

Golf is in Ofahengaue's blood. His grandfather, Sivia Wightman, immigrated to the United States from Samoa and became the first PGA member from the Samoan islands when he became the club pro at Holyoke Country Club. Sivia's son Tele Wightman, who captained Team Utah, played college golf at South Florida and matriculated on a handful of mini tours before a coaching career that included a brief stop with the BYU women's golf program.

"It's really, really awesome," Jordan told PGA.com. "It's crazy having your uncle be Tony Finau."

Congrats to Team Utah on winning the @NationalPro@PGAjrLeague Championship. 🏆 pic.twitter.com/ukO5NRCKvu

It took a few moments for word to spread among the small army of Team Utah parents and supporters — a group that included former PGA Tour golfer Daniel Summerhays as he supported his son Jack in much the same way his son supported (and caddied for) him at the Utah Open. But that allowed the celebration to kick off big when Huish and Shelley clinched the victory.

Huish, the 11-year-old from Highland, smoked a second shot into the green on the par-5 18th hole that set up a 10-foot birdie putt. The 13-year-old Shelley from Salt Lake City finished off the match with an easy tap-in for par to clinch the national title.

"It would be wrong to say I wasn't nervous," the well-spoken 11-year-old told ESPN. "But my coach always says to trust my training, so I pulled out my 5-iron and just hit it close."

Pedersen helped Team Utah knock out Oklahoma in the semifinals Sunday morning of the best-ball team tournament. A few hours later, he was tapping in a birdie to lift Utah to the national championship.

1️⃣ Catch up with these highlights from this morning's semi-finals