SALT LAKE CITY — President Joe Biden stumped for his national vaccine mandate at a speaking engagement in Chicago on Thursday but offered no further information on when the plan, that's set to impact 100 million U.S. workers, will go into effect.

Biden said the U.S. Department of Labor continues to work on the new rules which will be released "soon" but said the announcement itself has already spurred some large U.S. companies to launch their own in-house mandates ahead of the new federal rules.

"When I announced the first requirement, that encouraged businesses to feel they can come in and demand the same thing of their own employees," Biden said. "More people are getting vaccinated, more lives are being saved."

The president then reeled off a list of other U.S. companies that plan on issuing their own vaccine mandates and cracked a smile before whispering to the audience of workers at a new building in the Chicago suburb of Elk Grove Village about another company he had heard implemented vaccine mandates.

"Even, this I always get a kick out of, Fox News," Biden said. "Fox News requires vaccinations for all their employees."

Biden said he was told by United Airlines CEO Scott Kirby that after implementing a companywide mandate, vaccination rates among 68,000 United employees rose from 59% to 99% less than two months after implementation.

Under the plan, companies with 100 or more employees would have to require their workers to be vaccinated or undergo at least weekly COVID-19 testing.

The Occupational Safety and Health Administration, under the Department of Labor, is tasked with issuing an emergency temporary standard implementing the new requirement, which will cover 80 million private-sector workers. Businesses that don't comply could face fines of up to $14,000 per violation.

Earlier Thursday, the New York Times reported that OSHA is continuing to work on standards that pass legal muster nearly a month after Biden announced the mandate plan. That includes a number of rigorous, time-consuming steps, like demonstrating that workers face a grave danger at work and that a rule is necessary to address the danger. The agency is also working through the long list of questions that business groups have sent seeking guidance on the finer points of vaccine mandates. A few of the thorny issues:

The Times report also noted several big employers have imposed mandates since Biden's announcement, including 3M and Procter & Gamble. Others, like JPMorgan Chase and Walmart, have yet to issue broad requirements. But even after OSHA finalizes its rules, some employers wary of mandates may not act, betting that they won't be punished because of the agency's limited enforcement resources or that the standards could get bogged down in court.

"Some companies are looking at it and saying, 'Great that those employers had a good experience. I don't know if we'll have the same experience,'" Douglas Brayley, an employment lawyer at Ropes and Gray, told DealBook. "Or, they may look at it and say, 'Great, they had a 91% vaccination rate, but we are so thinly staffed we couldn't possibly lose 9% of our workforce.'" 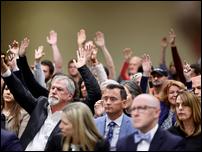 Hundreds of unmasked, anti-vaccine mandate Utahns packed into a committee room on Utah's Capitol Hill, spilling into five overflow rooms, to tell lawmakers to fight the requirements for large employers.

Their comments ranged from fury over what they called "tyranny" and "federal overreach" to fear they could lose their jobs and their ability to provide for their families. Several, including representatives from business associations, warned the requirements would only aggravate workforce shortages, from hospitals to restaurants.

"I have until the end of November to be fully vaccinated, prove it or lose my job," Christine Lewis, of North Ogden, said in the hearing. "If I lose my job, there's a good chance my husband and I will lose our home."

In Utah, about 3% of employers have more than 100 workers and would be subject to the requirement. About 65% of Utah workers are employed at companies with more than 100 employees, according to state estimates.

What Utah's leaders ultimately do to fight the rule depends on the yet-to-be-issued details of the emergency standard expected from OSHA. Legislative leaders have told the Deseret News they may call an October special session to tackle the issue, depending on those details.

However, lawmakers' line of questioning in Monday's hearing indicated the state could rely on Reyes' lawsuit and possibly a resulting court injunction to push pause on the rule, and they may direct Utah's labor department not to adopt the rule.

Following Biden's announcement last month, the Salt Lake Chamber, whose members represent a wide range of business types from across the state, cited its work to encourage Utah employees and their families to get vaccinated but also noted it has concerns about government overreach. Chamber officials said Utah employers have numerous unanswered questions as they await implementation details on the mandates.

"The Salt Lake Chamber remains concerned about the impact of the delta and other emerging variants of the coronavirus, and recognizes vaccination is the most important tool we have to end the pandemic," a chamber statement reads. "Consequently, the Chamber has worked diligently to encourage vaccinations across the state including our 'Bring It Home' campaign this summer, and it remains our high priority to be vigilant to mitigate the health and economic challenges the virus and its emerging variants are creating.

How much of Utah's workforce will be affected by Biden's new vaccine or testing requirements?

In an effort to drastically curb the resurgent COVID-19 pandemic, President Joe Biden announced an initiative that will compel all businesses across the country that have more than 100 employees to require their workers to either get vaccinated against COVID-19 or get tested for the virus regularly.

"As a business association the chamber is always concerned about government mandates that reach into employers' operations and employees' private lives. We are also concerned about issues of legal uncertainty, employer liability, employees potentially leaving an already constrained workforce, and the risk of deepening political divisiveness surrounding vaccination."

And some Utah business leaders have voiced concerns that the politicization of vaccine issues is only complicating things for employers that will be impacted by the new rules.

"The constant conflicting messages between federal and state government officials has only added to the confusion of a very difficult time for industries across the country," Converse said. "Our local business leaders genuinely care about the health and safety of our workforce.

"Only one-third of our companies have fully returned to work in office. We know what's at risk, and that a person's life has more value than political blustering."

Converse added that the rise of variants and positive COVID-19 cases is "staggering and avoidable" and that Utah businesses were looking for directives untainted by politics as they decide whether to delay or modify return-to-work plans.

"We need true guidance on this issue, based on science and not elections," she said. "Vaccinations are absolutely essential to putting an end to this virus. We know that. Our companies are doing everything they can to encourage employees to get vaccinated if they can.

"But for Utah to really crush the curve, the political bickering has to stop."