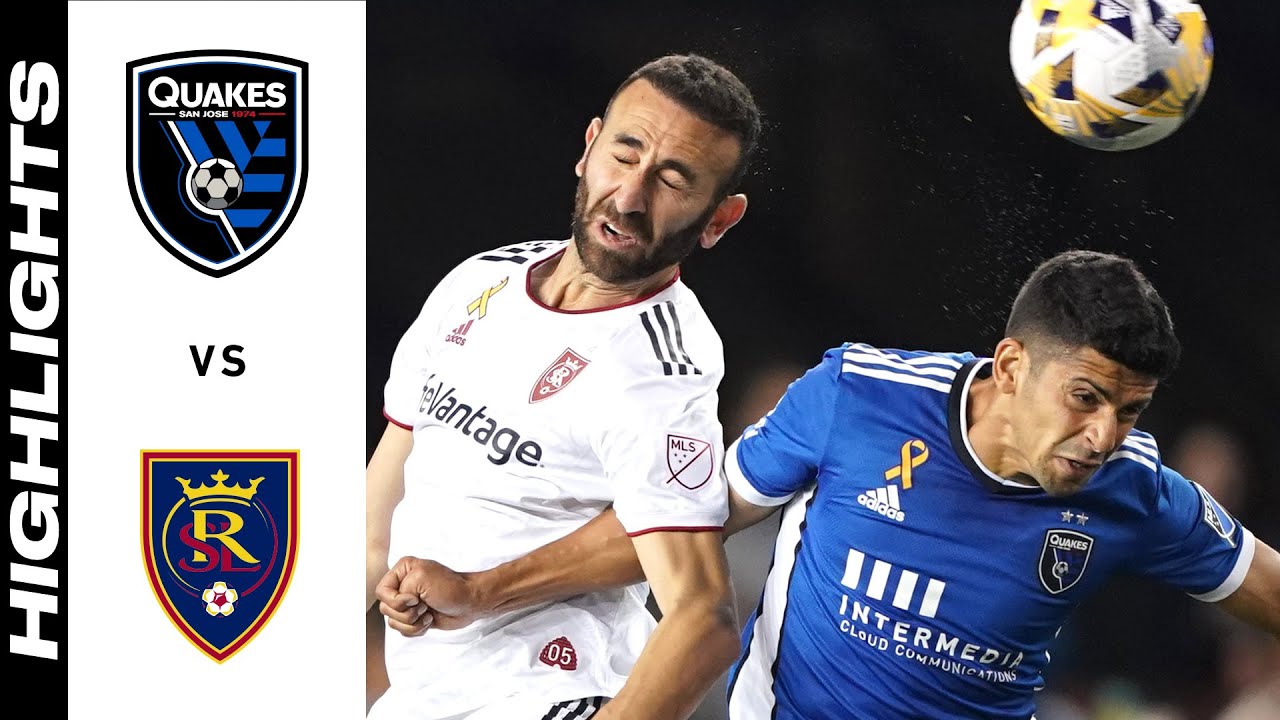 SANDY — Not even a hat trick from a rising star in Mexico could keep Real Salt Lake from three points Wednesday night.

Rubio Rubin scored two goals, including the match-winner on his final touch of the match in the 81st minute, to help Real Salt Lake scathe by with a 4-3 win over the Earthquakes, snapping a seven-match road winless skid Wednesday night at PayPal Park in San Jose, California.

Javier "Chofis" Lopez tallied the first hat trick of his Major League Soccer career, but even his ridiculous Olimpico-style goal wasn't enough to earn points for the home side that fell to 6-9-9 on the year. The Chivas de Guadalajara product scored two goals in the second half to help the Earthquakes.

With the win, Real Salt Lake improved to 9-9-6, good for 33 points and one point behind fifth place Portland in the Western Conference standings.

"We said we need points; we dropped points at LAFC after a good performance, but we looked forward," said RSL captain Albert Rusnak, who had a goal and two assists. "I thought our performance was better. Still a couple of mistakes that cost us a few goals. But if four goals wasn't going to be enough to earn three points, we were going to be disappointed."

In addition to Rubin, Rusnak and Justin Meram also scored a goal, though the one by the latter may officially be marked as an own goal.

Either way, the midweek match had it all — including Damir Kreilach's red card in the 72nd minute being downgraded to a yellow after the Earthquakes' victim in a collision told the head official there was no malicious intent to the move and video review confirmed it.

But so, too, may be the players — drunk with glee — when they wake up in Salt Lake City in a day after a road win, six goals away from home, and heading into Saturday's match against former RSL head coach Freddy Juarez and Seattle while tied with LAFC two points above the playoff line.

"A lot of times you want to talk about structures," RSL interim head coach Pablo Mastroeni said. "But what really defines great teams is the mentality. The best teams have a mentality that they believe regardless of the situation they are in.

"I just thought on this road trip both his leadership and Dami's leadership have been critical to this group," Mastroeni said. "We talk about mentality all the time, about wanting to go forward and be aggressive in the attack. You need a bunch of guys who believe in that.

"I think Albert has been exceptional. He's taken it on, and his leadership has been organic. Dami the same thing; two guys that I think have the real attention of the group and the direction that this group wants to move in."

For the second consecutive match, Mastroeni left three center backs on the back line paired with two wingbacks in a 3-5-2 formation. Those tactics were thrown for a loop when Erik Holt had to replace Marcelo Silva by the 20th minute, and Lopez scored his first by exploiting the wide-open space on the right side in the 26th minute.

Rubin equalized in first-half stoppage time, redirecting a save with his chest and into the back of the net just before halftime, which then pushed the visitors to Rusnak's go-ahead goal in the 48th minute.

"It's key," Rubin told RSL's home broadcast on KMYU at halftime. "We knew the goal they scored against us was not great, but we got the goal in the last minute of the first half. We're level and we're looking to get three points."

But Lopez responded barely a minute later, breaking ankles en route to his second goal in the 50th minute. The Chivas de Guadalajara product danced into the penalty area, past Holt and Donny Toia as he gleefully pulled another back and into the back of the net.

Lopez finished off his hat trick in the most spectacular fashion, spinning an Olimpico by RSL goalkeeper David Ochoa from the corner in the 65th minute to secure his hat trick.

Real Salt Lake could've wilted, down a goal on the road after giving far-too-many soft chances for the second straight match. But they didn't.

"A performance like this leaves you confident in how this team wants to move forward," Matroeni said.

Instead, Meram tied the match at 3-all with a glancing header in the 71st minute, breathing new life into an RSL side that may or may not have suffered a fortuitous deflection from the flight of the ball.

Either way, it was enough to pour confidence into the visitors — and Rubin finished off the scoring with his final touch of the match, netting the match-winner in the 81st minute before Ochoa and the defense held on for the final 10 plus nine minutes of stoppage time to push Salt Lake over the line.

"We've been behind many times this season, and we came back to win," Rusnak said. "We were twice down to LAFC, and came back into the game. When we're down, it shows that we're a good team.

"Our message before the game was one for another and another for the team. The result was the most important, though."