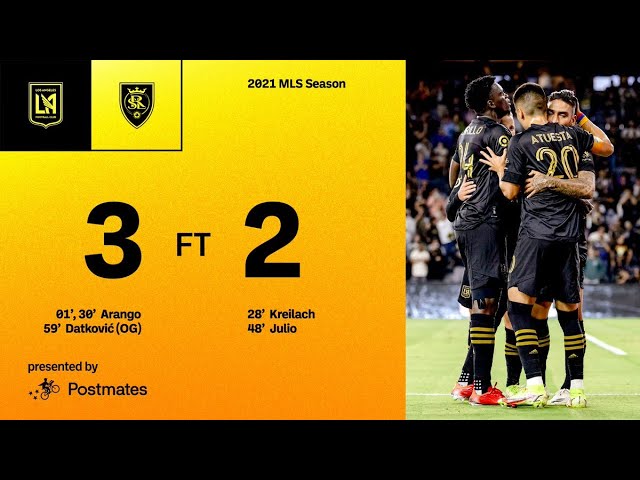 SANDY — Real Salt Lake's road trip to the City of Angels had a little bit of everything, from the fastest goal in MLS history to an own-goal decider to a new formation.

Everything, that is, except for three points.

Cristian "Chicho" Arango scored two goals, including the first just 20 seconds into the match, and Los Angeles FC took advantage of a misplayed own goal midway through the second half to secure its third victory of the season over Real Salt Lake 3-2 Sunday night at Banc of California Stadium in Los Angeles.

Damir Kreilach and Anderson Julio each scored for Real Salt Lake, which fell to 8-9-6 (30 points), and just 2-7-2 away from home with the loss on the back of a head-scratching own goal.

With the win, LAFC (8-9-6) moved into a tie with Real Salt Lake with 30 points, seventh place in the Western Conference, and the final playoff spot.

"I think that's the most aggressive we've been all year," RSL interim manager Pablo Mastroeni said. "I think there was a lot of great performances out in the field. In the midfield, we did a great job; Everton, Pablo, Besler, Damir when he was in there. … I couldn't be prouder of a group of guys who took to the field last week and embarked on this formation, and more importantly embarked on a mentality that you can't teach."

Even though the visitors tied the match twice, the poor defense didn't get better from there. LAFC out-shot RSL 12-10 over 90 minutes, with seven shots on goal to Salt Lake's two.

Yes, two. Real Salt Lake did not have a shot on target saved by Romero over 90 minutes. On the other end, RSL conceded the 11th goal in the four matches after pushing into the top third of Major League Soccer in fewest goals conceded through August.

Credit to Kreilach and Julio, whose pair of goals should've been the highlight of the match for RSL. But both times, their moments were let down by an inability to defend in the back — sometimes comically so.

"We gifted them goals, especially the third one," RSL captain Albert Rusnak said during his post-match TV interview. "I thought we had good fight, but that's how we need to find our goals: with character, with fight."

Coming off his first win as interim manager, Mastroeni tinkered with the RSL starting lineup and installed a new formation for the club that included three centerbacks in Toni Datkovic, Justen Glad and Erik Holt, combined with wingbacks Donny Toia and Maikel Chang.

Mastroeni had appeared to right the ship after a turbulent week that saw the departure of longtime employee and head coach Freddy Juarez to Seattle for an assistant coach job, as well as the club's worst performance of the year in a loss at lowly Vancouver.

And the early result was the worst-case scenario.

"It's so frustrating, but I think at the end of the day, we all have to be proud," Kreilach said. "I know it's hard to say, but it's the truth.

"Pablo surprised us a little bit, but I think we took it on perfectly. With how we played today, we deserved more than what happened tonight. We deserved at least one point. It's not easy to come to LAFC and control the game for 60-plus minutes."

Arango scored just 20 seconds into the match, dribbling through traffic before slotting home the opener past David Ochoa — before the clock had turned over the first minute.

"Obviously, we started terrible," Holt said. "The dribble through the middle, you've seen the replay. That's on us to start the game better. It's inexcusable, it's unacceptable. But as the game went on, not many teams come in here and want to play. I think we can be proud of how we came at them.

"I think we should've at least gotten a point, and even had some opportunities to win. I think it's a good learning lesson for us."

RSL was under duress from the get-go.

Kreilach leveled the match with a chip shot from just outside the box in the 29th minute, a perfect touch off a pass from Maikel Chang that reset the otherwise disastrous start to the match.

But the response by LAFC was also perfect.

Arango scored his second goal of the match just over a minute later, a glancing header from Eduard Atuesta that restored the home side's lead in the 30th minute.

Julio tied the match again just three minutes after halftime, finishing off Albert Rusnak's fast break with his sixth goal of the season and third in five matches.

The Ecuadorian winger out-raced two LAFC defenders, then easily slotted home the equalizer by Romoero to set the 2-2 tie in the 48th minute. This time, the visitors kept the stalemate for more than a minute.

Anderson Julio finds the equalizer for @realsaltlake early in the second half!

This game is wild! 🤯 pic.twitter.com/pj8b869SfJ

But they didn't keep it for good.

Again under pressure, Datkovic played a ball backward across the face of goal to Ochoa, who wasn't expecting the ball centrally and stared helplessly from the slippery turf as the ball trickled into his own net.

With shades of the United States' loss to Honduras that kept Team USA from its second-straight Olympics, RSL's defense was erratic at best and mismanaged at worst. A new formation and a lineup unaccustomed to playing together can only explain so much of the damage.

"If you lose the game, this is how you have to lose," Kreilach said. "Now we have to think about the next game; this is the way we have to play soccer, and we have to take a break for three days and then move on to San Jose."