Legacy of 9/11: Utah veteran develops program to help others heal from the wounds of war

6:30PM: Legacy of 9/11: Utah veteran develops program to help others heal from the wounds of war
KSL TV

FARMINGTON — Following the terrorist attacks on Sept. 11, 2001, an entire generation of men and women fought the war on terror in Iraq and Afghanistan.

Many came home with the unseen psychological and emotional scars of war. That part of the mission continues every day for many Utah veterans.

"If you can get out that front door, go on a hike with people and talk, you can really make a difference," said retired Army Sgt. Josh Hansen.

Hansen has taken that first step out the door with fellow veterans the past seven years as part of a program he co-founded called Continue Mission.

That first step is critical for veterans who may isolate themselves. Hansen knows; he was struggling when he came home from the Iraq War.

"I still really couldn't function well," he said. "I had a traumatic brain injury, neck and back injuries, so a lot of my recovery, I needed help just to even live."

The day the Twin Towers fell, Josh Hansen was a 30-year-old civilian.

"I just couldn't believe it," he said.

When he got home from work that night, he told his wife he had to do something to help.

The attacks on American soil compelled him to serve.

"I went down and signed up after 9/11 because I was so affected by it," said Hansen.

In battle in Iraq, Hansen was an IED hunter, tasked with finding roadside bombs.

"That was the main killer of our men and women overseas," he said. "But it was so rewarding, as well, because every bomb I pulled off the road was three lives saved from death or injury."

But six men in his unit were killed. 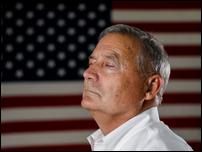 He rescued victims at the Pentagon on 9/11. Then he had to survive PTSD

Retired Utah National Guard Lt. Col. Craig Morgan went to the Pentagon on Sept. 11, 2001, as one person and walked away from the searing events of that day as another.

During his second tour, his vehicle was rocked by bombs repeatedly. After multiple injuries, he was flown out of Iraq in 2007.

"I spent three months in the hospital, years recovering, and it was devastating," Hansen said.

In addition to his physical injuries, Hansen came home with post-traumatic stress.

"Being here, while the other men were still in the battle, was difficult," he said, adding that he slipped into depression, felt like a burden on his family, and considered taking his own life.

But as he thought about that, "One of my soldiers that I led during combat died by suicide," he said.

Three others had already taken their lives. That was his wake up call.

"We supported each other overseas," said Hansen. "We need to start taking care of each other here at home."

So he started a program called Continue Mission with the motto: "No veteran left behind."

"We developed that program after my healing," Hansen said.

He started calling other vets, urging them to get out and stay active.

When Hansen started Continue Mission in 2014, it served 15 veterans. In 2019, more than 3,500 veterans joined in on 160 events — everything from hiking, pickle ball and cross country skiing, to family picnics.

"He saved my life, for sure," said Garrett McTear, an Army veteran.

Continue Mission helps guide veterans, like McTear, down a path of healthy living, exercise and avoidance of drugs and alcohol.

By 2004, he was an Army ranger in Iraq. "A team that was going after high-value targets," he said.

He's proud of his service, but he was wounded in an ambush.

"For much of my 20s, I was struggling a lot, mentally and emotionally," he said. He found healing at the Salt Lake VA, and met Josh Hansen there.

"He's such a good motivator," said McTear. "I got out. I was enjoying the outdoors, and that really was the therapy I needed. It turned my life around."

The two men didn't serve together, but McTear said, "(Hansen) treats me like a brother in arms, and I see him the same way."

Continue Mission includes spouses and families in many activities because that helps the healing.

"There are ups and downs, but there are more ups than downs," McTear said.

That's the way it goes on Continue Mission.

"We need to let veterans know that we're here for them and take care of one another here at home," said Hansen.