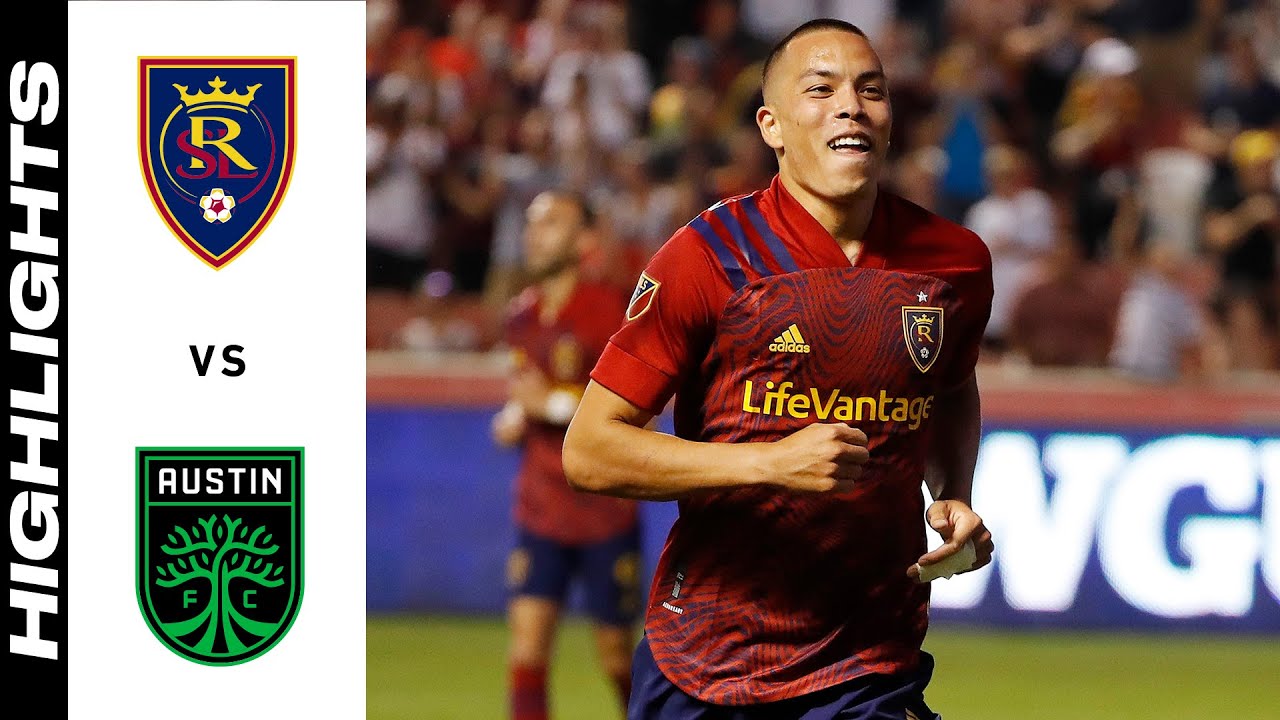 SANDY — The goal was only exceeded by the celebration — and equaled by the win.

Bobby Wood scored his second goal of the season in his fifth start, and Real Salt Lake snapped a three-match winless skid with a 1-0 win Saturday night over the shorthanded expansion side Austin FC in front of 17,506 fans at Rio Tinto Stadium.

"It was great to get the result; that's all that mattered today," Wood said. "We played good and didn't get the result a couple of games, and our mentality was just to get the three points. We did that today, and we should be proud of ourselves."

The 28-year-old Wood finished with one goal on one shot, a 50% passing accuracy and 11 duels won with one foul conceded before coming off for Rubio Rubin in the 73rd minute of play with the match-winner.

His team might have had another, too, but for some superb goalkeeping by Austin's Brad Stuver. The 30-year-old net minder made seven saves for the visitors, including a diving touch against Maikel Chang in the 80th minute that kept his team down just 1-0.

"Obviously, I think we could've managed it a little bit better," MacMath said. "But to be fair to us and to them, their keeper made a few world-class saves. If we had put one or two of those away, I think the game changes completely."

Wood gave the hosts an early lead, rising up in the 32nd minute to head home Joni Menendez's cross for the 1-0 advantage. The former U.S. international smashed the ball from the center of the box inside the top left corner, finishing off RSL's fourth shot on goal of the night with the edge just over the half-hour mark.

It was the first goal for Wood since July 24, and a feat only superseded by his celebration — wandering to the front row to give his daughter Ella a kiss while his wife Ditte held her up for daddy.

"It was amazing," Wood said of the goal, still beaming from the impact of having his family in the stands. "It's just a special moment for me; I won't forget it ever. It's something that I'll cherish the rest of my life."

Defensively, RSL held Austin (4-10-4, 16 points) without a shot on goal in the first half en route to the advantage. Los Verde scored three goals in the past five matches, all in a 3-2 win over the Houston Dynamo on Aug. 4.

Things got even worse for Austin just two minutes into the second half when Julio Cascante was shown his second yellow card (and automatic ejection) for a bad foul and denial of a goal-scoring opportunity on the edge of the penalty area against Justin Meram. Video review confirmed the call, which forced Austin to play the remainder of the match down a man.

In front of a less-than-packed stadium Saturday night, Real Salt Lake first needed to win. Second, they needed to dominate. At least one of the two missions were accomplished — and if nothing else, the most important one.

"It wasn't a pretty win," Wood said. "But we showed that we are a team, we grinded it out, and that's all that matters.

"Everyone fought for each other … and I'm glad we got the team result."

Winless in eight of their previous 10 matches following last week's 3-2 loss at Portland, RSL faced the last-place team in MLS's Western Conference, a club that averaged 0.94 points per game — the second-worst mark in the league.

Austin FC, the expansion side owned by former Columbus Crew owner Anthony Precourt, had just four wins in 17 matches and had scored a league-worst 13 goals all season.

Josh Wolff's side had been shut out in 10 of its previous 13 matches and were quickly moving farther down the playoff pecking order and into non-postseason contention at the halfway point of the season.

For as bad as the previous few results have been, RSL was still at 21 points on the year, two points behind LAFC for the seventh and final playoff spot in the West, and averaging 1.24 points per game — squarely in the thick of teams like Minnesota, Portland, Los Angeles and Dallas, who was tied for ninth alongside Salt Lake entering the match.

That put three points at an extra premium for the home club as they opened the second half of the regular season at Rio Tinto Stadium.

"We got the three points, which was the most important and start the second half of the season right," said RSL coach Freddy Juarez, whose team inched up the table into sixth place with the win. "It starts us off with a little more belief, gets us on the right track at home in front of our fans, and the best thing is we know we can get better. We're not happy with how we played. … But the most important thing is we got the result."

In many ways, RSL has felt like a playoff club, if not much more, despite its run of results — 26 goals scored and a plus-6 goal differential, tied for the third-best mark in the conference.

At some point, though, they have to prove they belong. Whether any of the critics or doubters were silenced after Saturday's performance remains to be seen. By the team's own admission, RSL didn't play particularly well at times.

But only one thing mattered: three points.

"It was a tough three-game away streak with two losses," MacMath said. "This was a big game for us, and I think the guys showed up for us as well."

Real Salt Lake returns home Wednesday against the Houston Dynamo for the club's second of three matches in eight days. Kickoff is scheduled for 8 p.m. MT on KMYU.