AAC's Aresco: Did not plot with ESPN to poach other leagues 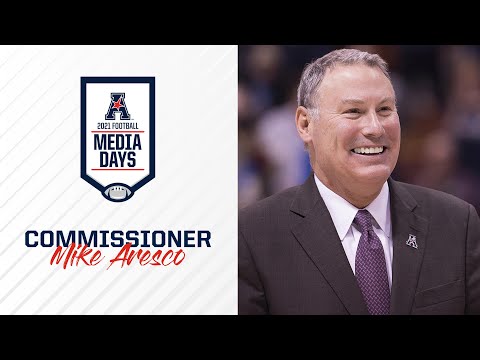 IRVING, Texas — American Athletic Conference Commissioner Mike Aresco vehemently denied that his league has ever "plotted" with ESPN to undermine another conference by poaching its schools.

"Our conference has never strategically aligned or plotted with ESPN to influence conference structures," Aresco said. "We wouldn't do that. ESPN has never done that and would not do it. We do consult with our television and business partners on issues related to our conference. Everyone does, of course. But any suggestions or statements that we colluded with ESPN with regard to the structure of any other conference is a completely unfounded and grossly irresponsible accusation."

Big 12 Commissioner Bob Bowlsby sent a cease-and-desist letter to ESPN last week, accusing the network of encouraging at least one other conference to raid that league as it tries to find a way forward with Texas and Oklahoma on their way to the Southeastern Conference.

The AAC was reported to be the conference ESPN was incentivizing to woo Big 12 teams. ESPN said there was no merit to the Big 12s allegation, and Bowslby said earlier this week the parties have agreed not to escalate the dispute publicly.

Meanwhile, Sen. Roger Marshall (R-Kan.) sent a letter to Attorney General Merrick Garland requesting the U.S. Department of Justice "investigate ESPN's role in the potential destruction of the Big XII Conference and if any anti-competitive or illegal behavior occurred relating to manipulating the conference change or ESPN's contractual television rights."

Aresco said he has not been in contact with any Big 12 schools, but did say the conference will always act in its best interest.

"If there are schools interested in us and they enhance our brand, why wouldn't we consider them?" Aresco said.

He added: "We never talk about whether anybody reaches out to us."

The American was birthed from the demise of the Big East in the last round of sweeping conference realignment in the early 2010s.

After losing several of its marquee major-college football schools, and having the traditional Big East schools break away to re-form a basketball-centric conference, the league added schools such as UCF, SMU, Tulane, Houston and Memphis and rebranded as the American in 2013.

The conference has become the best and most lucrative of the non-Power Five in football, sending a team to New Year's Six bowls five times in the seven-year history of the College Football Playoff.

The American has pushed its "Power Six" slogan and Aresco has become a vocal advocate for College Football Playoff expansion. But even with its new 13-year, $1 billion television contract with ESPN, the AAC lags far behind the Power Five in annual revenue.

The Big 12 distributed $34.5 million to each of its 10 members this years, though that number would likely drop as much as 50% in the future without Oklahoma and Texas.

Under the new ESPN deal, the AAC expects distribution to reach about $8 million per team per year.

Five years ago, when the Big 12 explored expansion, AAC schools were among those that applied. If the eight Big 12 schools being left behind by Texas and Oklahoma were to look for replacements, it would make sense that AAC schools would be candidates again.

"Anytime you talk about stability, you never know what can happen down the road. So you don't want to overdo it," Aresco said. "We think we've got a group of great schools. And who, by the way, early on may not have had as much in common as they do now. Having played together for a number of years, having developed that kind of camaraderie that comes with not only getting to know each other, but having great success and having great collective success, I think that's really helped our conference brand and helped our cohesion."

Houston coach Dana Holgorsen coached in the Big 12 for 15 years as an assistant at Texas Tech and Oklahoma State and the head coach at West Virginia.

"I don't see a whole lot of difference in where we're at right now and what the other conferences are like," Holgorsen said. "So, yeah, realignment's happening, I think we all know that. Where it's headed, I don't think anybody knows."

The College Football Playoff appears to be headed toward expansion, too.

Aresco said a CFP that includes 12 teams instead of four with bids to the six highest-ranked conference champions should help put an end to the Power Five/Group of Five distinction in FBS that the American has been pushing back against for years.

He also said he sees no reason conference realignment should impede progress on CFP expansion.

"There was broad support for the CFP (expansion) plan and it should move forward," Aresco said. "It creates greater opportunities for a wide range of teams, including our teams, who deserved a shot in prior seasons and obviously didn't have one."