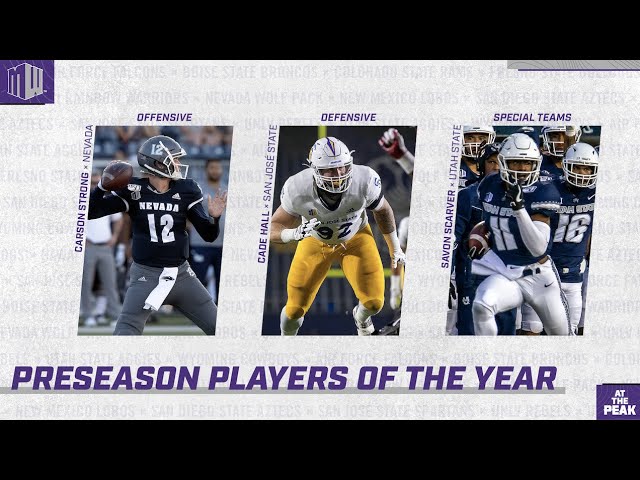 LAS VEGAS — By plenty of accounts, Utah State had a rather forgettable 2020 football season.

The Aggies were just 1-5 during the truncated COVID-19 season, opted out of their final game of the season amid controversy, and fired coach Gary Andersen midway through the second year of his second stint in Logan and brought in Arkansas State's Blake Anderson to help right the ship and turn the program around.

There's a lot to learn from the year, but also a lot to forget as Anderson turns the page on a new chapter in Aggie football history.

Unless, of course, you're Savon Scarver. When Anderson was first introduced as Utah State head coach in December, one of the first players he sat down with was Scarver. The kick returner probably could've gone to the NFL last year — he was, after all, a four-year senior and deserved that right. But Anderson knew Scarver had more potential than simply being an NFL practice squad player and occasional special teams ace.

"He can change the game in a matter of seconds," said Scarver's teammate Shaq Bond.

Coaches and media are taking notice, too.

The All-American kick returner was named Mountain West preseason special teams player of the year Thursday in a vote by league media, continuing his surge for both school, conference and national honors as one of the top returners in the country. The 5-foot-11 wide receiver has established himself as one of the most lethal returners in the country for nearly three years in a row, and he's being recognized for it.

But for Scarver, returning kicks is not an either-or situation for the offensive skill player.

"I consider myself an athlete; I can play any position on the field," Scarver told KSL.com during Mountain West media days. "Put me at returner, receiver, special teams; I will always give 110 percent effort. I just love football, and there's nothing I can do to be on the field.

"If they need me in the trenches, I'll get out there with those dogs."

Scarver's six kickoff returns for touchdowns are tied for the fifth-most in NCAA history, and the second-most in Mountain West history. He currently holds the school record with three kickoff returns for 100 yards to go along with 99-, 96- and 94-yard returns in his career, and ranks third in school history with an average of 28.7 yards per kickoff return on 80 kickoffs.

The senior from Las Vegas was a consensus All-American in 2018 when he broke on the scene, and enters his senior year as preseason All-American by Athlon Sports (third team) and Phil Steele Magazine (fourth team). Scarver made first-team All-Mountain West in 2018 and 2019 before being selected as an honorable mention in 2020.

The 2021 #MWFB preseason players of the year are... pic.twitter.com/D9TdDaWDt7

As a receiver, Scarver has caught 49 passes for 705 yards and four touchdowns in four years at Utah State.

"Every time he touches the ball is an opportunity to go to the house," Bond said. "Our coaches put together plans and schemes to be successful, but even when he has to detour or go away from his blocks, we still have the utmost confidence in him, to trust that whatever he sees is right. We never say anything to him; we always trust in him. There's no doubt that he's going to do his job right.

"As long as the other 10 guys do their job, he's going to make guys miss. It's nice seeing him getting returns. It's one of the hardest things to do repeatedly, and it just shows how good of a player he is."

Nevada quarterback Carson Strong took preseason offensive player of the year honors after leading the conference with more than 2,800 passing yards and 28 passing touchdowns on a 71% completion percentage in 2020. The reigning Mountain West offensive player of the year, Strong started the season on the Maxwell Award watchlist, given to the top overall player in college football.

San Jose State's Cade Hall was named preseason defensive player of the year. The All-American defensive lineman's 10.5 sacks was tied for the third-most nationally in 2020.